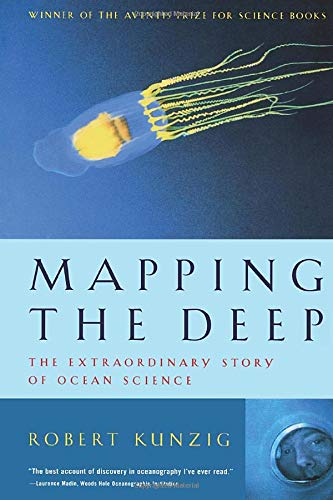 Mapping the Deep
by Robert Kunzig

Out of Stock
$55.99
inc. GST
A vivid, up-to-date tour of the Earth's last frontier, a remote and mysterious realm that nonetheless lies close to the heart of even the most land-locked reader.
Good
Only 0 left

Mapping the Deep: The Extraordinary Story of Ocean Science by Robert Kunzig

The sea covers seven-tenths of the Earth, but we have mapped only a small percentage of it. The sea contains millions of species of animals and plants, but we have identified only a few thousand of them. The sea controls our planet's climate, but we do not really understand how. The sea is still the frontier, and yet it seems so familiar that we sometimes forget how little we know about it. Just as we are poised on the verge of exploiting the sea on an unprecedented scale-mining it, fertilizing it, fishing it out-this book reminds us of how much we have yet to learn. More than that, it chronicles the knowledge explosion that has transformed our view of the sea in just the past few decades, and made it a far more interesting and accessible place. From the Big Bang to that far-off future time, two billion years from now, when our planet will be a waterless rock; from the lush crowds of life at seafloor hot springs to the invisible, jewel-like plants that float at the sea surface; from the restless shifting of the tectonic plates to the majestic sweep of the ocean currents, Kunzig's clear and lyrical prose transports us to the ends of the Earth.

Originally published in hardcover as The Restless Sea. "Robert Kunzig is a creator of what oceanographer Harry Hess once referred to as 'geopoetry.' He covers vast tracts of time and space and makes his subjects electrifying."-Richard Ellis, The Times [London] "The Restless Sea immediately surfaces at the top of the list of journalistic treatments of oceanography. . . .The book opened my eyes to numerous wonders."-Richard Strickland, American Scientist "When you head for the coast this summer, leave that trashy beach novel at home. Instead, pack Robert Kunzig's book. Because just beyond your rental cottage lies the restless sea, where three-mile-tall mountain ranges criss-cross the ocean floor, and deep trenches harbor mysterious creatures. . . . The book is easy to read, and will bring you up to date on the startling discoveries oceanographers have made during the past few decades."-Phillip Manning, The News and Observer [Raleigh, North Carolina] ] "Anyone who loves the sea should read this book."-Sebastian Junger

Robert Kunzig is European editor of Discover magazine, based in Dijon, France. His writing about the ocean has won the AAAS-Westinghouse Science Journalism Award and the Walter Sullivan Award for Excellence in Science Journalism.

GOR005883721
Mapping the Deep: The Extraordinary Story of Ocean Science by Robert Kunzig
Robert Kunzig
Used - Good
Paperback
WW Norton & Co
2000-11-01
352
0393320634
9780393320633
N/A
Book picture is for illustrative purposes only, actual binding, cover or edition may vary.
The book has been read but remains in clean condition. All pages are intact and the cover is intact. Some minor wear to the spine.