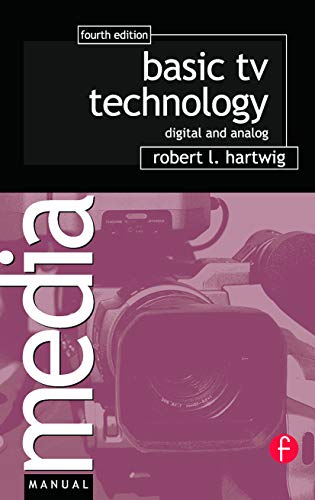 Out of Stock
$20.49
inc. GST
A guide to the fundamentals underlying television and video systems, it provides an explanation of how the principal pieces of equipment work, what their functions are, and how they are integrated to form a complex video system. It also includes information on compression, television standards, LCD displays, HD, and equipment.
Very Good
Only 0 left

Basic TV Technology is the essential basic guide to the fundamentals underlying all television and video systems, written for students and nontechnical professionals. You don't need to have a math or science background in order to understand this explanation of how the principal pieces of equipment work, what their functions are, and how they are integrated to form a complex video system. An understanding of this material will be necessary for you to succeed in the real world, where one person often has to perform many different roles and functions within a production. Armed with some basic technical background information, you'll be more effective at figuring out new applications and at problem-solving.

The fourth edition of Basic TV Technology has been updated to reflect the industry shift to digital video and includes new information on compression, television standards, LCD displays, HD, and equipment.

This book features the accessible Media Manual format, in which every topic is covered in two pages: one of explanatory text and one of figures.

"I read this book to refresh my basic grasp of television technology concepts, and for that purpose it worked perfectly. Organized into small sections which build slowly from simple ideas (electricity basics) to complex tools (video servers). The book also includes a useful list of further reading material and a reference glossary." -- An Amazon Reviewer

Robert Lee Hartwig was born and raised in a small northern California farming town. At the age of 13, his parents bought an 8mm movie camera. He spent the next couple of years fooling around with animation and teaching himself simple film editing. He spent his teenage summers on the family farm. He attended Chico State University where, quite by accident, he got involved in the college radio station. While involved in college radio, he served as Business Manager of the station and was appointed to be the student manager of the station. At the same time, the school was developing a Mass Communications Degree program, which he transferred to as soon as the program opened. While in school, he worked at both AM and FM radio stations as an on-air announcer. He still worked summers on the farm because the 80 - 100 hour weeks made a lot more money for him. He was a member of the first graduating class in Mass Communications from Chico State where the faculty awarded him the "Leadership Merit Award" upon graduation. He went to San Diego State University for his Master's Degree in Radio and Television. Coming from a rural background, living in a city the size of San Diego drove him nuts. The culture shock was the greatest challenge to completing the MA. While working on the MA, he also worked for the San Diego Area Instructional Television Authority, was a Television Specialist for the Adult Division of the San Diego Community College District, worked as a photographer on a special project for the San Diego Community College Association, and taught a night class in TV Production for the Adult Division of the San Diego Community College District. This teaching experience gave him the teaching bug. He was granted his MA in December of 1973. He moved back to northern California and got a part-time teaching job in the Mass Communications Department at Butte Community College in Oroville, CA. While at Butte he also produced and directed video programs for t

GOR005618477
Basic TV Technology: Digital and Analog by Robert L. Hartwig
Robert L. Hartwig
Used - Very Good
Paperback
Taylor & Francis Ltd
2005-03-21
204
0240807170
9780240807171
N/A
Book picture is for illustrative purposes only, actual binding, cover or edition may vary.
This is a used book - there is no escaping the fact it has been read by someone else and it will show signs of wear and previous use. Overall we expect it to be in very good condition, but if you are not entirely satisfied please get in touch with us.