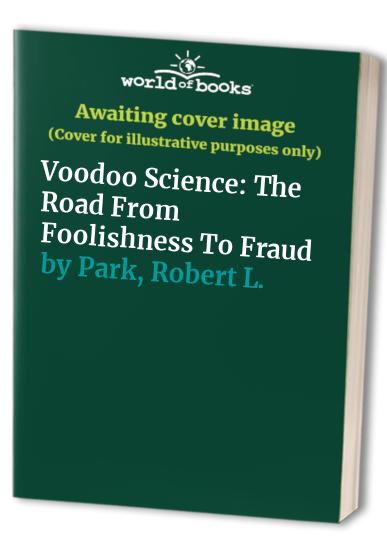 In Stock
$24.49
inc. GST
Presents an examination of the social, economic, and political forces that elicit or support flawed or fake science and sustain it in the face of overwhelming contrary evidence. This book includes pseudoscience, or irrational beliefs dressed up in scientific garb, the misuse of science to deliberately mislead, and pathological science.
Very Good
Only 1 left

Voodoo Science: The Road from Foolishness to Fraud by Robert L. Park (Professor of Physics, University of Maryland)

Science fascinates us by its power to surprise. Occasionally, unexpected results that appear to violate accepted laws of nature can herald revolutionary advances in human knowledge. Many 'revolutionary' discoveries, turn out to be wrong, however, and even eminent scientists have had their careers tarnished, mistakenly thinking that they have made a great discovery. This is pathological science, in which scientists are subject to self-delusion. And if scientists can sometimes fool themselves, how much easier it is to craft arguments deliberately intended to befuddle jurists with little or no scientific background. This is junk science, typically consisting of theories of what could be so, with little supporting evidence to prove that it is so. Sometimes there is no evidence at all. Ancient beliefs in demons and magic still sweep across the modern landscape, but they are now dressed in the language and symbols of science. This is pseudoscience, which its practitioners may believe to be science, just as witches and faith healers may believe they can call forth supernatural powers. What may begin as an honest error, has a way of evolving from self-delusion to fraud. As Robert Park points out, the line between foolishness and fraud is thin, and because it is not always easy to tell when that line is crossed, he uses the term voodoo science to cover them all: pathological science, junk science, pseudo-science, and fraudulent science. His book is intended to help the reader recognize voodoo science and to understand the forces that conspire to keep it alive. Scientists, Park observes, insist that the cure for voodoo science is to raise the level of scientific literacy. But what is it that a scientifically literate society should know? It is not specific knowledge of science that the public needs, Park argues, so much as a scientific world view - an understanding that we live in an orderly universe governed by natural laws that cannot be circumvented by magic or miracles.

Review from previous edition Park sets the formulas aside to get at the essence of scientific thinking, and shows through real life examples how people (including scientists) are led astray. * Psychology Today September 2000 *
this book is entertaining and provocative reading * Redaktion Angewadte Chemie No. 6 2002 *
It is an admirable analysis: wittily written, vivid and put together without a hint of malice. * The Observer, 17/03/2002 *
..page by page the book is a source of great pleasure. Park is a superb storyteller, he writes gracefully with energy and charm, and the varieties of silliness he chronicles are fascinating. Most scientists will enjoy the book immensely. * Nature 7 September 2000 *
Professor Park does more than debunk, he crucifies...You'll never again waste time or your money on astrologers, 'quantum healers', homeopaths, spoonbenders, perpetual motion merchants, or alien-abduction fantasists. * Richard Dawkins *
addictively entertaining...a brave and brilliant quest * The Times 12 October 2000 *
If you want more books on sideways thinking, go straight to Robert Park's excellent Voodoo Science: The road from foolishness to fraud. * New Scientist 18/11/00 *
...a brave and witty quest to alert us to the nonsense being dressed up as science...It is an addictively entertaining read, and a must for anyone who thinks that shuffling their houseplants around will bring them love and a lottery win in 2001. * Times Books, 6th December 2000 *
This book was a joy and an entertainment. I read it like a good novel coupled with the sense of self-improvement...This book I didn't want to end and its review was a labour of love. * Prof Michael Baum, Healthwatch Newsletter April 2001 *

About Robert L. Park (Professor of Physics, University of Maryland)

Robert L. Park is Professor of Physics and former chairman of the Department of Physics at the University of Maryland. He also directs the Washington office of the American Physical Society. Author of more than a hundred scientific papers on the structure of crystal surfaces, he writes regularly for the New York Times and other newspapers and is a regular contributor of science features for the Washington Post. Professor Park lives in Adelphi, Maryland.

IT'S NOT NEWS, IT'S ENTERTAINMENT; THE BELIEF GENE; PLACEBOS HAVE SIDE EFFECTS; THE VIRTUAL ASTRONAUT; THERE OUGHT TO BE A LAW; PERPETUUM MOBILE; CURRENTS OF FEAR; JUDGEMENT DAY; ONLY MUSHROOMS GROW IN THE DARK; HOW STRANGE IS THE UNIVERSE?; INDEX