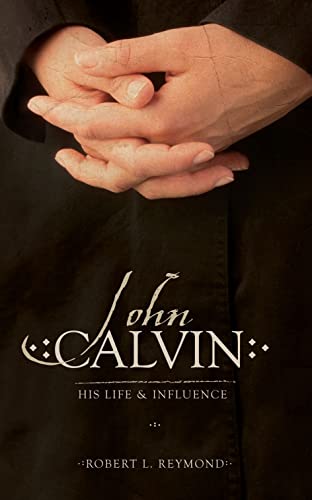 John Calvin: His Life And Influence by Robert L. Reymond

"...despite his stern Calvinist upbringing" - Why is it that in the modern media the word 'Calvinist' is always accompanied by 'stern', 'dour' or 'strict'? Most of the people who use the terms together have next to no knowledge of what Calvinism is - and know even less about who Calvin was. An old-style reactionary? A hard-line ayatollah, raging at the world without any thought? - or is there more to this man than uninformed contemporary critics would have us believe?

Robert Reymond brings us John Calvin the man. A reality quite different from the caricature often painted today. Here is a man of deep spirituality with a real love for his fellow man and God. A man also with tremendous intellectual abilities. Whether the moniker 'stern Calvinist' is applicable or not - his life has much to teach us.

"Reymond's book is succinct and comprehensive, appreciative and probing, historical and theological, scholarly and pastoral. Especially valuable is Reymond's treatment of the burning of Servetus...that ameliorates to some degree Calvin's involvement in the tragedy."

"...sheds new light on a famous and familiar name. His writing style is scholarly and authoritative... intensely interesting reading."

"It is astonishing how much information Professor Reymond has packed into such a small volume. No student of the Reformation should be without it. Robert Reymond has done the Christian Church a great service in his work, lifting the veil, letting us see the true man of God and the enormous force for good that he has been right down to the present time"

... an excellent introduction to the Reformer's life and theology.

"...tells the story of Calvin's life and thought in a compact and compelling way that will serve to acquaint readers with the warm human character of Calvin... His description of Calvin's masterful statement at the Lausanne Disputation of 1536 is by itself worth the price of the book."

GOR006071285
John Calvin: His Life And Influence by Robert L. Reymond
Robert L. Reymond
Used - Very Good
Paperback
Christian Focus Publications Ltd
2008-09-20
160
1857929667
9781857929669
N/A
Book picture is for illustrative purposes only, actual binding, cover or edition may vary.
This is a used book - there is no escaping the fact it has been read by someone else and it will show signs of wear and previous use. Overall we expect it to be in very good condition, but if you are not entirely satisfied please get in touch with us.