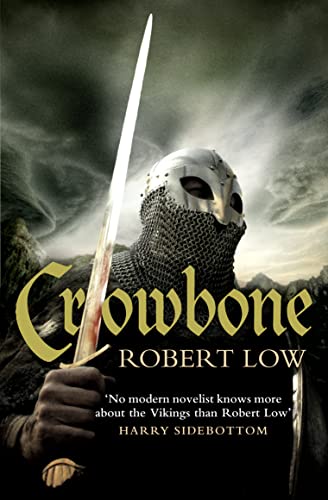 Island of Mann, 979AD. A monk lies dying with a sworn secret he must pass onto Crowbone, the true heir to Norway's throne, before he breathes his last. The monk's words will decide the fate of a kingdom.

But once the secret is revealed, Crowbone's long-time enemy, Gunnhild, the Witch Mother of Kings, threatens his path to the crown and will stop at nothing to prevent him from attaining his royal destiny. Crowbone and his men must survive an unforgiving journey and face their sworn rival. It is a quest that will test the very bonds that tie the Oathsworn together.

`Gore and guts fill the pages of CROWBONE ... but they're also filled with the kind of muscular, fast-moving prose that gives the story real depth and distinction' SUNDAY TIMES

Praise for the OATHSWORN series:

`In the Oathsworn series he has created a completely convincing and utterly compelling modern Viking Saga. The history, myth and fiction are folded seamlessly together: wonderful, unbeatable stuff' Harry Sidebottom

`historical writing at its best and most full-blooded, with its tremendous pacing, black comedy, a wonderfully vivid and rough-hewn prose style like runes hacked into granite'
WILLIAM NAPIER

`Gripping, written with great bravura, and dense in texture in the best traditions of the historical novel... All in all he has done something remarkable'
Allan Massie, SCOTSMAN

Robert Low has been a journalist and writer since the age of seventeen. He covered the wars in Vietnam, Sarajevo, Romania and Kosovo until common sense and the concerns of his wife and daughter prevailed.

To satisfy his craving for action, having moved to an area rich in Viking tradition, he took up re-enactment, joining The Vikings. He now spends his summers fighting furiously in helmet and mail in shieldwalls all over Britain and winters training hard.

GOR003866394
Crowbone (The Oathsworn Series, Book 5) by Robert Low
Robert Low
The Oathsworn Series
Used - Very Good
Paperback
HarperCollins Publishers
2013-06-06
384
0007298560
9780007298563
N/A
Book picture is for illustrative purposes only, actual binding, cover or edition may vary.
This is a used book - there is no escaping the fact it has been read by someone else and it will show signs of wear and previous use. Overall we expect it to be in very good condition, but if you are not entirely satisfied please get in touch with us.