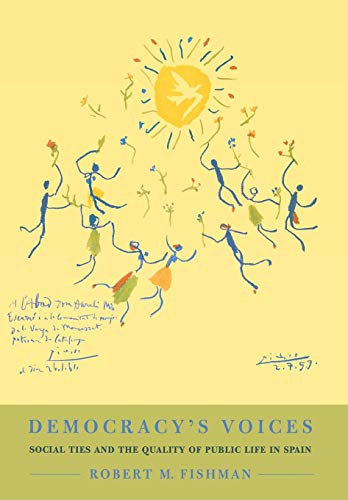 Building on one of sociology's core ideas-that social ties can shape collective outcomes-Democracy's Voices shows that connections across class boundaries can remake public rhetoric and thus the quality of democratic life. Robert M. Fishman takes up a...

Democracy's Voices: Social Ties and the Quality of Public Life in Spain by Robert M. Fishman

Building on one of sociology's core ideas-that social ties can shape collective outcomes-Democracy's Voices shows that connections across class boundaries can remake public rhetoric and thus the quality of democratic life. Robert M. Fishman takes up a question of enduring significance to people concerned with the quality of democratic public life, focusing on why political rhetoric proves engaging and broadly relevant, or disengaging and narrow. The answer to that question, he argues, is to be found not only in the deeds of prominent politicians and the nature of official institutions but also in the existence and the character of social connections among ordinary citizens. Fishman's book, based on long-term fieldwork and systematic survey research in Spain, identifies the special contribution to democratic quality made by conversations between intellectuals and workers.

Fishman focuses on what he calls the "discursive horizons" of local leaders and communities: the actual location of the problems and proposed remedies articulated in political rhetorics. Democracy's Voices shows how the subcultural context of social ties may accentuate or diminish their power to reshape rhetorics. Fishman argues that conversations are able to remake public rhetorics whereas ties that take the form of brokerage lack that ability. The book also offers a general critique of social capital theory and argues that the full ability of social ties to shape collective outcomes can only be observed when one distinguishes in useful ways among types of ties.

"At some point in the late twentieth century, contacts between organized labor and progressive intellectuals began to wane, with devastating effects both for progressive politics and for the quality of democratic discourse. As intellectuals turn from the dead ends of academic leftism toward the grimmer world of everyday politics, they will profit from the analysis of the ties between workers and intellectuals in this book. Robert M. Fishman weaves a rich tapestry of quantitative and qualitative evidence about variations in intellectual-worker ties in Spain, shows how the decline of such ties affects the vitality of civil life, and calls for a renewal of democratic discourse." -- Sidney Tarrow, Cornell University
"Democracy's Voices is brilliantly conceived, carefully researched, elegantly written, and captivating in its conclusions. It will establish Robert M. Fishman as one of the major sociologists of democracy in our generation. For those, such as myself, who have been skeptical of the importance of deliberation for democratic politics, he shows not only that it matters, but also how it matters. This book will be of interest to scholars of democracy throughout the social sciences, and it deserves a wide readership beyond the walls of the academy as well." -- Ian Shapiro, Yale University
"Theoretically original, empirically rigorous, and contextually rich, Robert M. Fishman's book offers a provocative new perspective on the social underpinnings of effective democracy. It will attract a broad readership and enrich debates within and beyond academia." -- Theda Skocpol, Victor S. Thomas Professor of Government and Sociology, Harvard University, and author of Diminished Democracy: From Membership to Management in American Civic Life
"What guarantees the quality of democratic systems in contexts where institutions alone are insufficient? From detailed quantitative survey data, rich qualitative observation, and interviews with local labor leaders, intellectuals, and workers in Spain, Robert M. Fishman brilliantly shows how ordinary conversations between workers and intellectuals can shape the discursive horizons of participants, thereby transforming the nature of the public sphere and the salience of democratic rhetoric. This is a must-read book for those interested in the role of social networks and social ties in sustaining commitment to democracy, broadly construed." -- Peter Bearman, Director, Institute for Social and Economic Research and Policy, Columbia University

Robert M. Fishman is Professor of Sociology and Fellow of the Kellogg and Nanovic Institutes, University of Notre Dame. He is the author of Working Class Organization and the Return to Democracy in Spain, also from Cornell.

GOR007153391
Democracy's Voices: Social Ties and the Quality of Public Life in Spain by Robert M. Fishman
Robert M. Fishman
Used - Very Good
Hardback
Cornell University Press
2004-04-13
208
0801442265
9780801442261
Winner of Honorable Mention, Best Book Award (Political Soci.
Book picture is for illustrative purposes only, actual binding, cover or edition may vary.
This is a used book - there is no escaping the fact it has been read by someone else and it will show signs of wear and previous use. Overall we expect it to be in very good condition, but if you are not entirely satisfied please get in touch with us.