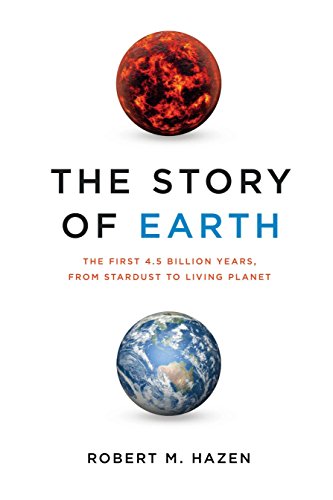 The Story of Earth
by Robert M Hazen

In Stock
$56.99
inc. GST
Part nature writing, part astrobiology, "The Story of Earth" advances two controversial claims: just as humans evolved, so did Earth, and second, life on Earth evolved from minerals. Hazen also shows how human actions could transform our habitat in a geological blink.
Very Good
Only 1 left

The Story of Earth Summary

The Story of Earth: The First 4.5 Billion Years, from Stardust to Living Planet by Robert M Hazen

Earth evolves. From first atom to molecule, mineral to magma, granite crust to single cell to verdant living landscape, ours is a planet constantly in flux. In this radical new approach to Earth's biography, senior Carnegie Institution researcher and national bestselling author Robert M. Hazen reveals how the co-evolution of the geosphere and biosphere--of rocks and living matter--has shaped our planet into the only one of its kind in the Solar System, if not the entire cosmos.

With an astrobiologist's imagination, a historian's perspective, and a naturalist's passion for the ground beneath our feet, Hazen explains how changes on an atomic level translate into dramatic shifts in Earth's makeup over its 4.567 billion year existence. He calls upon a flurry of recent discoveries to portray our planet's many iterations in vivid detail--from its fast-rotating infancy when the Sun rose every five hours and the Moon filled 250 times more sky than it does now, to its sea-bathed youth before the first continents arose; from the Great Oxidation Event that turned the land red, to the globe-altering volcanism that may have been the true killer of the dinosaurs. Through Hazen's theory of "co-evolution," we learn how reactions between organic molecules and rock crystals may have generated Earth's first organisms, which in turn are responsible for more than two-thirds of the mineral varieties on the planet--thousands of different kinds of crystals that could not exist in a nonliving world.

The Story of Earth is also the story of the pioneering men and women behind the sciences. Readers will meet black-market meteorite hawkers of the Sahara Desert, the gun-toting Feds who guarded the Apollo missions' lunar dust, and the World War II Navy officer whose super-pressurized "bomb"--recycled from military hardware--first simulated the molten rock of Earth's mantle. As a mentor to a new generation of scientists, Hazen introduces the intrepid young explorers whose dispatches from Earth's harshest landscapes will revolutionize geology.

Celebrated by the New York Times for writing "with wonderful clarity about science . . . that effortlessly teaches as it zips along," Hazen proves a brilliant and entertaining guide on this grand tour of our planet inside and out. Lucid, controversial, and intellectually bracing, The Story of Earth is popular science of the highest order.

The Story of Earth Reviews

"With infectious enthusiasm for his subject, Hazen introduces readers to Earth's defining moments . . . [and] argues that understanding the interplay between Earth's geological and biological pasts can help us predict and prepare for the future of life on our planet."
--Saron Yitbarek, Discover

"A fascinating new theory on the Earth's origins written in a sparkling style with many personal touches. . . . Hazen offers startling evidence that 'Earth's living and nonliving spheres' have co-evolved over the past four billion years."
--Kirkus, starred review


"Concise and colourful . . . Drawing on the latest research and influenced by advances in astrobiology, Hazen takes a radical standpoint . . . to tell the amazing tale of our planet's intertwined living and non-living spheres."
--Birger Schmitz, Nature


"Lively and vivid . . . Hazen is a master storyteller with a great story to tell . . . a sweeping rip-roaring yarn of immense scope, from the birth of the elements in stars to meditations on the future habitability of our world . . . Anyone new to Earth history will find Hazen's account a revelation."
--A. D. Anbar, Science


"I'm not competent to assess the accuracy of Robert Hazen's thesis about geological and biological history, but I am competent to judge it a fascinating story, far more alive than you might guess if all you knew was the subject was old dead (?!) rocks."
--Bill McKibben, author of Eaarth: Making a Life on a Tough New Planet


"Hazen takes us on one of the grandest tours of them all--the 4.5 billion year history of our planet. From the atoms of the crust of the Earth come our bodies, the entire living world, and this exciting book. Read Hazen and you will not see Earth and life in the same way again."
--Neil Shubin, paleontologist and author of Your Inner Fish


"The Story of Earth is that rare book that can transform the way you see the world. By synthesizing a vast span of time and knowledge into crisp, delightful prose, Hazen really does make our planet into a story, and a compelling one. I was left with a new sense of context for our place in this galactic home."
--Charles Wohlforth, author of The Fate of Nature and The Whale and the Supercomputer


"A gripping, well-told story . . . [Hazen's] vivid descriptions of the early Earth's tortured landscapes are a joy, as is his Carl Sagan-like gift for conveying the sheer age of our world and the vastness of space. A fantastic, stirring read."
--Michael Marshall, New Scientist


"Cramming billions of years of geological evolution into a single book is a daunting challenge, but it's one that Hazen, a geophysicist, has risen to splendidly."
--Sid Perkins, Science News


"Hazen illuminates the origins of Earth and the origins of life [in] a thoroughly accessible book, mixing a variety of scientific disciplines to tell an unforgettable story."
--Publishers Weekly


"Hazen has a gift for explaining science in lay terms, and even readers with a minimal understanding of geology, chemistry, and physics will find this book riveting."
--Nancy R. Curtis, Library Journal

Robert M. Hazen is the Clarence Robinson Professor of Earth Science at George Mason University and a Senior Scientist at the Carnegie Institution's Geophysical Laboratory. The author of numerous books--including the bestselling Science Matters--Hazen lives with his wife in Glen Echo, Maryland.

GOR006167818
The Story of Earth: The First 4.5 Billion Years, from Stardust to Living Planet by Robert M Hazen
Robert M Hazen
Used - Very Good
Hardback
Penguin Putnam Inc
2012-04-26
306
0670023558
9780670023554
N/A
Book picture is for illustrative purposes only, actual binding, cover or edition may vary.
This is a used book - there is no escaping the fact it has been read by someone else and it will show signs of wear and previous use. Overall we expect it to be in very good condition, but if you are not entirely satisfied please get in touch with us.