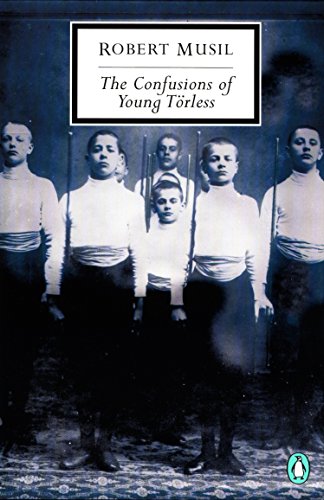 The Confusions of Young Torless
by Robert Musil

In Stock
$21.49
inc. GST
At a bleak, isolated military school on the fringes of the Austro-Hungarian Empire, four young cadets - Torless, Beineberg, Reiting and their victim Basini - drift even further away from their school-fellows into a private world of ritual, secrecy and torture.
Very Good
Only 3 left

The Confusions of Young Torless Summary

The Confusions of Young Torless by Robert Musil

At a bleak, isolated military school on the fringes of the Austro- Hungarian Empire, four young cadets - Torless, Beineberg, Reiting and their victim Basini - drift even further away from their school- fellows into a private world of ritual, secrecy and torture. First published in 1906.

Robert Musil (1880-1942) is principally known in English as the author of The Man Without Qualities, Five Women, The Posthumous Papers of a Living Author and The Confusions of Young Torless.

Shaun Whiteside's translations include Nietzsche's The Birth of Tragedy and Musil's The Confusions of Young Torlessfor Penguin Classics.

J. M. Coetzee was born in Cape Town, South Africa, on February 9, 1940, and studied first at Cape Town and later at the University of Texas at Austin, where he earned a Ph.D. degree in literature. In 1972 he returned to South Africa and joined the faculty of the University of Cape Town. His works of fiction include Dusklands, Waiting for the Barbarians, which won South Africa's highest literary honor, the Central News Agency Literary Award, and The Life and Times of Michael K., for which Coetzee was awarded his first Booker Prize in 1983. He has also published a memoir, Boyhood: Scenes From a Provincial Life, and several essays collections. He has won many other literary prizes including the Lannan Award for Fiction, the Jerusalem Prize and The Irish Times International Fiction Prize. In 1999 he again won Britain's prestigious Booker Prize for Disgrace, becoming the first author to win the award twice in its 31-year history. In 2003, Coetzee was awarded the Nobel Prize in Literature.

GOR003269414
The Confusions of Young Torless by Robert Musil
Robert Musil
Penguin Modern Classics
Used - Very Good
Paperback
Penguin Books Ltd
2001-09-27
176
0142180009
9780142180006
N/A
Book picture is for illustrative purposes only, actual binding, cover or edition may vary.
This is a used book - there is no escaping the fact it has been read by someone else and it will show signs of wear and previous use. Overall we expect it to be in very good condition, but if you are not entirely satisfied please get in touch with us.