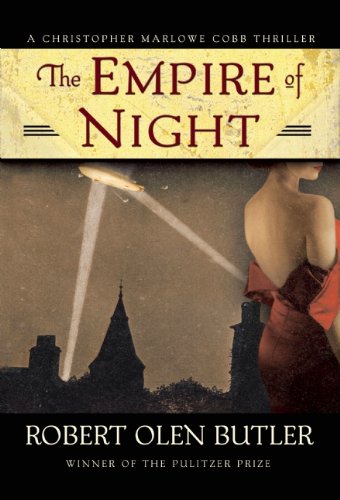 The Empire of Night
by Robert Olen Butler

The Empire of Night Summary

The Empire of Night by Robert Olen Butler

In the first two books of his acclaimed Christopher Marlowe Cobb series, The Hot Country and The Star of Istanbul, Pulitzer Prize winner Robert Olen Butler captured the hearts of historical crime fiction fans with the artfulness of his World War I settings and his charismatic leading man, a Chicago journalist recruited by American intelligence.

In The Empire of Night, it is 1915, and President Woodrow Wilson is still assessing the war's threat to the United States. After proving himself during the Lusitania mission, Kit is now a full-blown spy, working undercover in a castle on the Kentish coast owned by a suspected British government mole named Sir Albert Stockman. And Kit is again thrown together with a female spy--his own mother, the beautiful and mercurial Isabel Cobb, who also happens to be a world-famous stage actress. Starring in a touring production of Hamlet, Isabel's offstage role is to keep tabs on the supposed mole, an ardent fan of hers, while Kit tries to figure out Stockman's secret agenda. Following his mother and her escort from the relative safety of Britain into the lion's den of Berlin, Kit must remain in character, even under the very nose of the Kaiser.

The Empire of Night Reviews

"[A] thrilling historical series. . . . Mr. Butler does a terrific job of depicting both the journalist's facility for teasing information from his subjects and the spy's incessant fear of being discovered. There's something almost magical about the way the author re-creates this 1915 milieu."--Wall Street Journal

"The Empire of Night is a cracking good spy thriller, with a cast of memorable characters and a terrifically suspenseful plot that will have you casting the movie as you read. And Butler's elegant writing elevates the book--he is a master of everything from lyrical description to believable dialogue."--Tampa Bay Times

"The Empire of Night is a smart and layered yarn . . . propulsive reading . . . Butler has developed a knack for snapping off taut, Hammett-esque sentences at tense moments. . . . Butler is determined to show that genre fiction can be intellectually rich."--Star-Tribune (Minneapolis)

"Butler combines fascinating historical detail about the pre-WWI period with genuine suspense and a tongue-in-cheek wit that gives the whole a uniquely tart flavor. The multilayered, adversarial relationship between Kit and Isabel grows more fascinating with each installment and will leave readers eager to learn more."--Booklist (starred review)

"Exciting . . . the period details are spot on. . . . This tale of shifting allegiances and worldwide consequences enthralls."--Publishers Weekly

"[An] elegant thriller. . . . A meticulously researched page-turner that will appeal to spy novel buffs and lovers of historical novels, as well as any general reader intrigued with the power struggles of World War I. If you've never read a novel by Butler--one of the great stylists writing today--you're in for a treat with The Empire of Night."--Huntington News

"Butler's continuous pressure on the suspense makes the novel a page-turning, nail-biting experience, and his use of short, crisp sentences magnifies the tension."--Readers Unbound

"An engrossing thriller. Cobb's traversal of the German countryside is tension-laden, and the finale wrongfoots with unexpected twists. Well-acted, center-stage entertainment."--Crime Book Beat

"Deliciously captivating. . . . I can hardly wait for the next in the series."--Arab Voice

Robert Olen Butler is the Pulitzer Prize-winning author of over a dozen novels, including Hell, A Small Hotel, and two previous installments of the Christopher Marlowe Cobb series, The Hot Country and The Star of Istanbul. He is also the author of six short collections and a book on the creative process, From Where You Dream. He has twice won a National Magazine Award in Fiction and received the 2013 F. Scott Fitzgerald Award for Outstanding Achievement in American Literature. He teaches creative writing at Florida State University.

GOR008341259
The Empire of Night by Robert Olen Butler
Robert Olen Butler
Christopher Marlowe Cobb Thriller
Used - Very Good
Hardback
Grove Press / Atlantic Monthly Press
2014-10-16
401
0802123236
9780802123237
N/A
Book picture is for illustrative purposes only, actual binding, cover or edition may vary.
This is a used book - there is no escaping the fact it has been read by someone else and it will show signs of wear and previous use. Overall we expect it to be in very good condition, but if you are not entirely satisfied please get in touch with us.