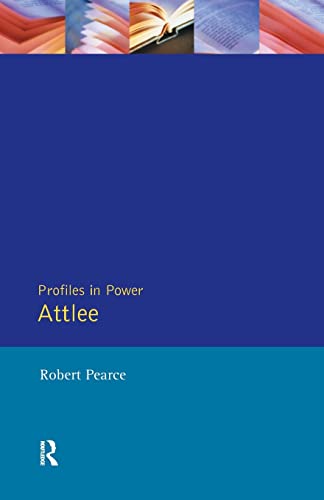 In Stock
$15.49
+10% GST
Clement Attlee was the Labour leader from 1935 to 1955, and Prime Minister of the first majority Labour governments in the postwar years from 1945 to 1951. This study examines the man behind the stern exterior, finding ambition and indecision, and a moral vision.
Good
Only 1 left

Attlee is undoubtedly one of the key figures in modern British history. An important figure in Churchill's War Cabinet, and premier of the first majority Labour Government, he created the Welfare State, nationalised a substantial part of industry and secured the independence of India. Yet his political stature remains unresolved. Was he Churchill's "modest man with much to be modest about" who squandered the fruits of victory, or, as many now claim, one of the truly great prime ministers? Robert Pearce's lucid and drily amusing study goes behind the stern exterior to find ambition and indecision, and a uniquely moral vision.

"Robert Pearce's contribution approaches Attlee with rigour and a laudable lack of reverence. His brisk and concise treatment accorded Attlee in this work well suits the subject and will prove of much interest to students of 20th century British history." Imperial and Commonwealth history

GOR001976721
Attlee by Robert Pearce
Robert Pearce
Profiles In Power
Used - Good
Paperback
Taylor & Francis Ltd
1997-03-06
216
0582256909
9780582256903
N/A
Book picture is for illustrative purposes only, actual binding, cover or edition may vary.
This is a used book - there is no escaping the fact it has been read by someone else and it will show signs of wear and previous use. Overall we expect it to be in very good condition, but if you are not entirely satisfied please get in touch with us.