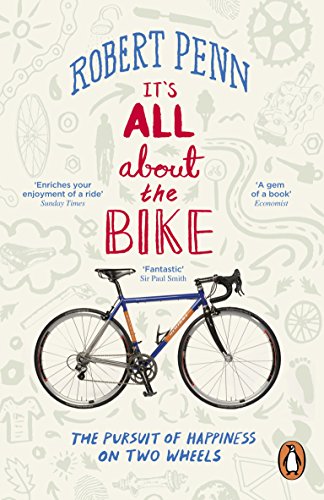 It's All About the Bike
by Robert Penn

In Stock
$19.49
inc. GST
The author has ridden a bike most days of his life. He rides to get to work, to bathe in air and sunshine, to stay sane and to feel free. This title tells the story of his love affair with cycling and the journey to build his dream bike.
Very Good Good
14 in stock

It's All About the Bike Summary

It's All About the Bike: The Pursuit of Happiness On Two Wheels by Robert Penn

Robert Penn's It's All About the Bike: The Pursuit of Happiness on Two Wheels is a paean to the humble bike; it's the story of why we ride, and why this simple machine holds the power to transport us all.

Robert Penn has ridden a bike most days of his life. He rides to get to work, to bathe in air and sunshine, to stay sane and to feel free. This is the story of his love affair with cycling and the journey to build his dream bike; a freewheeling pilgrimage taking him from Californian mountain bike inventors to British artisan frame builders, and from perfect components to the path of true happiness.

'Be swept along by Penn's enthusiasm, humour and refreshing candour'
Sunday Telegraph

'Enriches your enjoyment of a ride'
Sunday Times

'As a depiction of a world you might vote for, Penn's does not sound bad at all'
Observer

Robert Penn writes for the Financial Times, Observer and Conde Nast Traveller, as well as a host of cycling publications. He is the author of The Wrong Kind of Snow. Robert lives in the Black Mountains, South Wales with his wife and three children and commutes to work across a heather moor on a mountain bike.

It's All About the Bike Reviews

Gem of a book * Economist *
Penn writes with a Bill-Brysonesque facility for concentrating a lot of information and research into an easy-to-read ... Best of all ... his account enriches your enjoyment of a ride -- Tim Dawson, Cycle Guy * Sunday Times *
Fantastic ... Well worth a read if, like me, you love cycling! -- Paul Smith
Artfully, Penn turns his quest for hardware ... into a worldwide spin around cycling and its culture -- William Fotheringham * Guardian *
The pages overflow with pioneers, mavericks and geniuses - certainly, it is hard to imagine anyone who reads this book being able to buy a bike "off the peg" again -- Tim Lewis * Observer *
I've just spent a week pedalling slowly from Windermere to Aviemore with a copy of Penn's zealous eulogy in my pannier. His infectious admiration for the exhilarating sociability of cycling, coupled with reverence for quality craftsmanship, made highly engaging company ... appreciate the wit and enthusiasm of this unusual odyssey -- James Urquhart * Independent *
Penn tells us that the bicycle, as we know it, was invented in 1885 and is the most efficient form of transport ever devised... A joyful book -- William Leith * The Scotsman *
Bike-lit is booming, and while 'cross-country hardtail' might not have the same ring to it as 'penny-farthing', there's evidently little to do with cycling about which Robert Penn can't wax lyrical. Whether his subject is spokes or saddle sores, he is relentlessly enthusiastic... Penn's amiability is puncture-proof -- Stephanie Cross * Daily Mail *
[H]is adrenalin-charged enthusiasm... delivers a good ride... The social history is snappy and his almost religious quest for ultimate craftsmanship full of wit. -- James Urquhart * Financial Times *

Robert Penn is an author, journalist and TV presenter. Robert wrote and presented Tales from the Wild Wood, a TV series about British woodlands. He lives in a wooded valley in the Black Mountains, South Wales, with his wife, three children, two spaniels and a collection of axes.

GOR002639144
It's All About the Bike: The Pursuit of Happiness On Two Wheels by Robert Penn
Robert Penn
Used - Very Good
Paperback
Penguin Books Ltd
2011-05-05
208
0141043792
9780141043791
N/A
Book picture is for illustrative purposes only, actual binding, cover or edition may vary.
This is a used book - there is no escaping the fact it has been read by someone else and it will show signs of wear and previous use. Overall we expect it to be in very good condition, but if you are not entirely satisfied please get in touch with us.