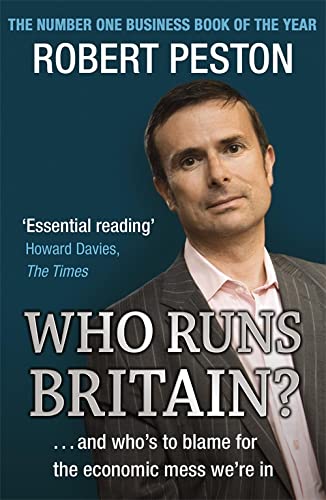 Who Runs Britain?
by Robert Peston

Out of Stock
$13.49
inc. GST
ITV's political editor Robert Peston lifts the lid on credit crunch Britain and the rise of the super-rich.
Very Good
Only 0 left

Who Runs Britain?: ...and who's to blame for the economic mess we're in by Robert Peston

On 13 September 2007, Robert Peston broke the news that Northern Rock had become a victim of the global credit crunch and was seeking an emergency loan from the Bank of England.

It was the latest in a long line of scoops by this award-winning journalist. Over the weeks that followed, the Government found itself exposed to the Rock to the tune of GBP57 billion, or almost GBP2000 for every taxpayer. As Robert Peston shows in this fascinating book, the seeds for the collapse of Northern Rock and the upheavals in the financial markets were sown years before.

WHO RUNS BRITAIN? is the first time anyone has drawn all the threads together to weave a story that's rich in extraordinary characters and outrageous feats of economic bravado. This book is about the widening gap between the super-rich and the rest of us. It explores and explodes the myth that the financial creativity of those who are amassing these vast fortunes is good for the wider economy and for all of us. Whether you're a financial expert or just have a bank account, WHO RUNS BRITAIN? is a book you must read.

Robert Peston is ITV's political editor, presenter of the politics show Peston on Sunday and founder of the education charity, Speakers for Schools (www.speakers4schools.org). He has written four books, How Do We Fix This Mess?, Who Runs Britain?, Brown's Britain and WTF?. For a decade until the end of 2015, he was at the BBC, as economics editor and business editor. Previously he was City editor at the Sunday Telegraph, political editor and financial editor at the FT, a columnist for the New Statesman, and at the Independent in various roles. Peston has won more than 30 awards for his journalism, including Journalist of the Year from the Royal Television Society. His blog is itv.com/robertpeston, on Facebook he is facebook.com/pestonITV and he is @peston on Twitter.

GOR000944665
Who Runs Britain?: ...and who's to blame for the economic mess we're in by Robert Peston
Robert Peston
Used - Very Good
Paperback
Hodder & Stoughton General Division
2008-10-30
368
0340839449
9780340839447
Short-listed for Heathrow Travel Product Award: Travel Read, Non-Fiction 2009
Book picture is for illustrative purposes only, actual binding, cover or edition may vary.
This is a used book - there is no escaping the fact it has been read by someone else and it will show signs of wear and previous use. Overall we expect it to be in very good condition, but if you are not entirely satisfied please get in touch with us.