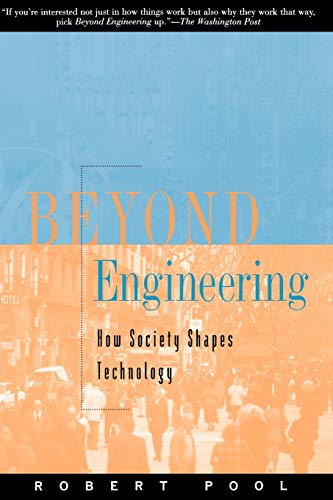 Beyond Engineering
by Robert Pool, Ph.D.

In Stock
$42.99
inc. GST
In Beyond Engineering, Robert Pool provides an engaging look at modern technology and an illuminating account of how technology and the modern world shape each other.
Very Good
Only 2 left

Beyond Engineering: How Society Shapes Technology by Robert Pool, Ph.D.

We have long recognized technology as a driving force behind much historical and cultural change. The invention of the printing press initiated the Reformation. The development of the compass ushered in the Age of Exploration and the discovery of the New World. The cotton gin created the conditions that led to the Civil War. Now, in Beyond Engineering, science writer Robert Pool turns the question around to examine how society shapes technology. Drawing on such disparate fields as history, economics, risk analysis, management science, sociology, and psychology, Pool illuminates the complex, often fascinating interplay between machines and society, in a book that will revolutionize how we think about technology. We tend to think that reason guides technological development, that engineering expertise alone determines the final form an invention takes. But if you look closely enough at the history of any invention, says Pool, you will find that factors unrelated to engineering seem to have an almost equal impact. In his wide-ranging volume, he traces developments in nuclear energy, automobiles, light bulbs, commercial electricity, and personal computers, to reveal that the ultimate shape of a technology often has as much to do with outside and unforeseen forces. For instance, Pool explores the reasons why steam-powered cars lost out to internal combustion engines. He shows that the Stanley Steamer was in many ways superior to the Model T-it set a land speed record in 1906 of more than 127 miles per hour, it had no transmission (and no transmission headaches), and it was simpler (one Stanley engine had only twenty-two moving parts) and quieter than a petrol engine-but the steamers were killed off by factors that had little or nothing to do with their engineering merits, including the Stanley twins' lack of business acumen and an outbreak of hoof-and-mouth disease. Pool illuminates other aspects of technology as well. He traces how seemingly minor decisions made early along the path of development can have profound consequences further down the road, and perhaps most important, he argues that with the increasing complexity of our technological advances-from nuclear reactors to genetic engineering-the number of things that can go wrong multiplies, making it increasingly difficult to engineer risk out of the equation. Citing such catastrophes as Bhopal, Three Mile Island, the Exxon Valdez, the Challenger, and Chernobyl, he argues that is it time to rethink our approach to technology. The days are gone when machines were solely a product of larger-than-life inventors and hard-working engineers. Increasingly, technology will be a joint effort, with its design shaped not only by engineers and executives but also psychologists, political scientists, management theorists, risk specialists, regulators and courts, and the general public. Whether discussing bovine growth hormone, molten-salt reactors, or baboon-to-human transplants, Beyond Engineering is an engaging look at modern technology and an illuminating account of how technology and the modern world shape each other.

"It's a truism that technology has driven modern history. In this wise, insightful book, Robert Pool explores the deeper truth that history shapes technology."-Richard Rhodes, author The Making of the Atomic Bomb.
"Robert Pool brings the whole pageant of technology to life-with all its triumphs, humanness, heartaches, and accidents of history. A great read."-Brian Arthur, Citibank Professor at the Sante Fe Institute
"Story telling is a fine art, and Robert Pool is a master. From a squash court under the stadium at the University of Chicago, to the flight deck of modern aircraft carrier, Beyond Engineering treats the reader to 101 tales about the creation and use of modern technologies. Like all great story tellers, Poll weaves his entertaining narrative into an exploration of some deeply serious questions. To what extent is technical knowledge objective, to what extent socially constructed? How much does the broad course of technical progress depend upon small, perhaps even random, events? In clear, simple language, Pool illuminates such critical questions in a way that should bring insight to nontechnical and to many technical readers."-M. Granger Morgan, Head of the Department of Engineering and Public Policy, Carnegie Mellon University
"A crystal clear narrative about the recent history of large-scale technology. He demonstrates persuasively that technology shapes our lives in complex ways, deserving as much thought and watchful skepticism as political affairs demand. His may be the best book available for the general reader engaging our human-built world."-Thomas P. Hughes, Mellon Professor Emeritus, The University of Pennsylvania, and Visiting Professor, Massachusetts Institute of Technology
"A less modest and more accurate subtitle of this superb book would read: A New, Lively, Absorbing, and Deeply Instructive Way of Thinking About Modern Technology. For anyone at all interested in understanding the complex and puzzling ways in which major new technologies came to be and ended up as they have, this is a definitive work, not to be missed." -Robert K. Merton, University Professor Emeritus, Columbia University
"This thoughtful, well-researched title by science writer Pool lays out a rich, comprejensive view of the development of modern technologies, with a keen emphasis on how nontechnological factors-such as the sociological, political, and simply serendipitous-shape such complex technologies."-Library Journal
"Lord, what fools we humans be in the face of complexity. But if you want to understand the nature and the possible antidotes for such foolishness, Pool's book offers an appropriately hlepful mix of speculation and substance."-Doug Brandow, World
"If you're interested not just in how things work but also why they work that way, pick [eyond Engineering] up."-John Burgess, The Washington Post

About the Author: Robert Pool writes for Discover and New Scientist and is author of Eves Rib.

GOR001933955
Beyond Engineering: How Society Shapes Technology by Robert Pool, Ph.D.
Robert Pool, Ph.D.
Sloan Technology
Used - Very Good
Paperback
Oxford University Press Inc
1999-05-01
370
0195129113
9780195129113
N/A
Book picture is for illustrative purposes only, actual binding, cover or edition may vary.
This is a used book - there is no escaping the fact it has been read by someone else and it will show signs of wear and previous use. Overall we expect it to be in very good condition, but if you are not entirely satisfied please get in touch with us.