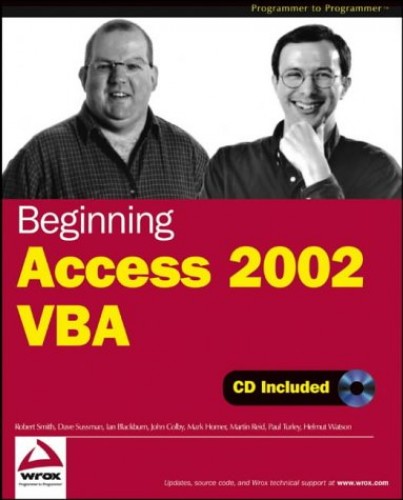 What is this book about? Access 2002 is the core database application within the Office XP suite. Using VBA (Visual Basic for Applications), the user can create his or her own programs in what is essentially a subset of the Visual Basic programming language. Using VBA with Access is a tremendously powerful technique, as it allows you to create great user interfaces (like forms or reports) as a front end to actual data storage and manipulation within the database itself. What does this book cover? This book is a revision of the best-selling Beginning Access 2000 VBA, reworked to provide a rich tutorial to programming Access 2002 with VBA. New material covers the enhanced options in Access 2002 for publishing data to the Web, handling XML, integrating with SQL Server Desktop Engine, and so on. Who is this book for? This book is for the Access user who already has a knowledge of databases and the basic objects of an Access database, and who now wants to learn how to program with VBA. No prior knowledge of programming is required.

Robert Smith has been developing solutions with Access for over 10 years, in fact, ever since its original launch in November 1992. He currently works for EH3 Consulting, a software consultancy with offices in Edinburgh and Bath, where most of his time is spent designing Access or SQL Server - based solutions for a variety of companies throughout the UK and Europe.
When not working, Rob takes a keen interest in the progress (or otherwise) of Crystal Palace Football Club, as well as indulging his other passion for collecting (and occasionally sampling) fine wines. In practice, the varying fortunes of the former normally mean that he spends a lot more time sampling than collecting.

Dave Sussman has spent the majority of his professional life as a developer, using both Unix and Microsoft-based products. After writing his first two books while in full time employment, he realized that being an author sounded more glamorous than being a programmer. The reality is somewhat different. He now spends most of his time writing books for Wrox Press, speaking at conferences, and playing with most be ta products that Microsoft ships.

Ian Blackburn is director of Blackburn IT Services Ltd (http: //www.bbits.co.uk) - an IT firm based in Kent, UK, offering technical training, development, and consultancy. He has long experience in many areas including Microsoft Office development, ASP and ADO, SQL Server, Site Server, Visual InterDev, Visual Studio .NET, ASP.NET, and e-commerce. He is an MCSE and has been a MCP since 1993.

John Colby is an independent consultant who has specialized in Access development since 1994, designing databases for companies in the U.S., Canada, Mexico, and Ireland. John is past president and current board member of Database Advisors Inc., (www.databaseadvisors.com), a not-for-profit organization dedicated to providing fellow Access and Visual Basic developers with a place to discuss what we do, why we do it, what works, and what doesn't. Database Advisors Inc. also allows developers to showcase their talents by sharing databases, wizards, and various code packages.
John lives in Connecticut with his family. He enjoys music, travel, and all things computers, and dreams of getting back to Europe someday soon.

Mark Horner is Senior Architect and Development Consultant with Torville Software, which specializes in decision support and web-centric knowledge systems. He has worked in a variety of roles with Australian, UK, and US corporations including: ANZ Banking Group, Aspect Computing, British Aerospace, Citibank, Hewlett Packard, and Tenix Defence Systems.
Mark holds a bachelor of business degree from Swinburne University of Technology and an MBA from Monash University, Australia. He is a member of the Internet Society (www.isoc.org) and a Dilbert devotee (www.dilbert.com).
I would like to thank the Wrox team for their determination "to make the books that make the difference" and the engineers at Redmond for more great development tools. Special thanks to Sarah Bowers for getting me into technical reviewing and to Beckie Stones for getting me into writing.

Martin W. P. Reid is an Analyst at The Queen's University of Belfast. Martin has been working with Microsoft Access since version 1 and his main interest is working with Access Data Projects. He has contributed several articles to Smart Access, Inside SQL Server, and Inside Microsoft Access, and is a contributor to TechRepublic (www.techrepublic.com) and www.builder.com. He is also co-author of SQL: Access to SQL Server, published by Apress, and has been the technical editor on books involving technologies from VB.NET database programming to Oracle 9i PL/SQL and Macromedia Dreamweaver MX.

Paul Turley, his wife Sherri, and their four children live in the small community of Port Orchard, Washington, on the shores of the Puget Sound. He works for Netdesk, Corp in downtown Seattle as a Developer Instructor and Project Consultant. He began his IT career in 1988, installing and supporting medical billing systems and obtained his MCSD certification in 1996. Paul began using Access version 1.0, SQL Server 4.21, and Visual Basic 3.0. Since then, he has built custom database systems for several businesses including Hewlett-Packard, Nike, Microsoft, and Boise Cascade. He has worked with Microsoft Consulting Services on large scale, multi-tier solutions employing new Microsoft technologies. As an independent trainer/consultant, he traveled for Microsoft and various training providers to teach project design and management, application development, and database design.
Paul currently maintains www.scout-master.com, a web-based service that enables Boy Scout units around the world to maintain their membership and advancement records on-line using ASP.NET and SQL Server. He has published course materials and has been a contributing author on books and articles, including Professional Access 2000 Programming and SQL Server Data Warehousing with Analysis Services from Wrox Press.

Helmut Watson started his IT career nearly twenty years ago writing games for the BBC micro. Soon after that he had to get a proper job so he moved into databases, initially using PC-Oracle v1.0. He quickly decided to change to DBMS that actually worked - Dbase, Clipper, Paradox, Informix, SQL Server, etc. After twenty years, there aren't many on the list left to try now.
Helmut specializes in database analysis and GUI design and runs a consultancy called "Nearly Everything" from his home in Essex, UK.
Known as Woof! to his friends (or anyone else who buys him a beer), he is a keen cyclist and a finalist in the 2000 British Marbles-on-Sand championships. Most people think he's a bit odd until they meet him - then they're sure!

GOR001969277
Beginning Access 2002 VBA by Robert Smith
Robert Smith
Used - Very Good
Paperback
John Wiley & Sons Inc
2003-02-13
976
0764544020
9780764544026
N/A
Book picture is for illustrative purposes only, actual binding, cover or edition may vary.
This is a used book - there is no escaping the fact it has been read by someone else and it will show signs of wear and previous use. Overall we expect it to be in very good condition, but if you are not entirely satisfied please get in touch with us.