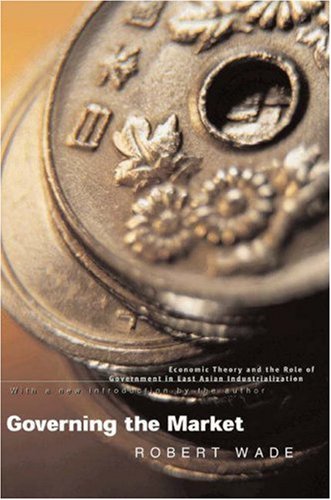 Governing the Market
by Robert Wade

Used Price
$25.99
inc. GST
Free Shipping in Australia
Focusing on the economic success of Taiwan, as well as the markets of Korea, Japan and Hong Kong, this study maintains that economic development in South East Asia has been caused by the manner in which allocation decisions were divided between markets and public administration.
Reviews:
Trustpilot
Very Good

Governing the Market: Economic Theory and the Role of Government in East Asian Industrialization by Robert Wade

Published originally in 1990 to critical acclaim, Robert Wade's Governing the Market quickly established itself as a standard in contemporary political economy. In it, Wade challenged claims both of those who saw the East Asian story as a vindication of free market principles and of those who attributed the success of Taiwan and other countries to government intervention. Instead, Wade turned attention to the way allocation decisions were divided between markets and public administration and the synergy between them. Now, in a new introduction to this paperback edition, Wade reviews the debate about industrial policy in East and Southeast Asia and chronicles the changing fortunes of these economies over the 1990s. He extends the original argument to explain the boom of the first half of the decade and the crash of the second, stressing the links between corporations, banks, governments, international capital markets, and the International Monetary Fund. From this, Wade goes on to outline a new agenda for national and international development policy.

"[This] study by Robert Wade is one of only a handful that describes how economic policy in East Asia has actually worked. . . . A superb book. . . . Governing the Market demystifies East Asia's miracle without making it seem any less remarkable. It assaults idle prejudice on every side of the debate about markets and the role of government. It is long overdue, and deserves to be widely read." * Economist *
"This valuable book provides a quite detailed and carefully analytical account of the economic development of Taiwan and its political and social setting. . . . [Wade] makes a good case for his view that while market forces, at home and abroad, have been given much play, the government has also played a key part." * Foreign Affairs *
"Winner of the 1992 Best Book Award of the Political Economy Section of the American Political Science Association"

Robert Wade is Professor of Political Economy at the London School of Economics. He has a long-standing interest in the causes of economic growth and economic inequality on a world scale and has conducted field research in Pitcairn Island, Italy, India, South Korea, Taiwan, and the World Bank. He worked earlier as an economist in the World Bank and in the Office of Technology Assessment (U. S. Congress).

GOR002063360
Governing the Market: Economic Theory and the Role of Government in East Asian Industrialization by Robert Wade
Robert Wade
Used - Very Good
Paperback
Princeton University Press
1992-02-24
456
0691003971
9780691003979
N/A
Book picture is for illustrative purposes only, actual binding, cover or edition may vary.
This is a used book - there is no escaping the fact it has been read by someone else and it will show signs of wear and previous use. Overall we expect it to be in very good condition, but if you are not entirely satisfied please get in touch with us.