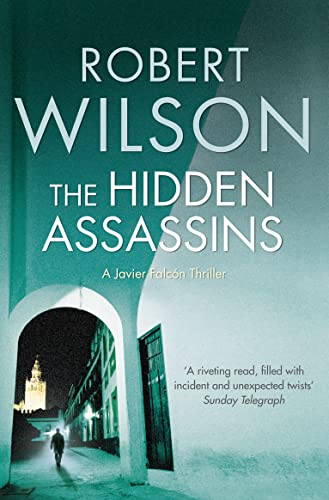 The Hidden Assassins
by Robert Wilson

The gripping new psychological thriller featuring Javier Falcon, the tortured detective from `The Silent and the Damned' and `The Blind Man of Seville.'

The Hidden Assassins by Robert Wilson

The gripping new psychological thriller featuring Javier Falcon, the tortured detective from `The Silent and the Damned' and `The Blind Man of Seville.'

As Inspector Jefe Javier Falcon investigates a faceless corpse unearthed on a municipal dump, Seville is rocked by a massive explosion. An apartment block is destroyed, and when it's discovered that its basement housed a mosque everybody's terrorist fears are confirmed.

Panic sweeps the city, more bodies are dragged from rubble, the climate of fear infects everyone and terror invades the domestic life of flamboyant judge Calderon and the troubled mind of Consuelo, Falcon's one-time lover.

With the media and political pressure intensifying, Falcon realizes all is not as it appears. But as he comes close to cracking a conspiracy, he discovers an even more terrifying plot - and the race is on to prevent a catastrophe far beyond Spain's borders.

Praise for `The Hidden Assassins':

`Wilson, as always, delivers.' The Times

`If you only read one thriller this year, make it this one... a thrilling and memorable read.' Literary Review

`Wilson has combined an utterly gripping and detailed police investigation with a sensitive and compelling examination of the impact of history on modern Spanish life. One of the year's best thrillers.' Irish Independent

Praise for `The Silent and the Damned':

`First rate... Wilson at his best, a taut, gripping narrative and a sensitive study of the tormented detective.' Daily Telegraph

`Wilson's plotting is intricate, his detective endearingly human, Seville a captivating venue. This is crime fiction of high order.' The Times

Robert Wilson was born in 1957. A graduate of Oxford University, he has worked in shipping and advertising in London and trading in West Africa. He is married and divides his time between England, Spain and Portugal.

GOR002169129
The Hidden Assassins by Robert Wilson
Robert Wilson
Used - Very Good
Paperback
HarperCollins Publishers
2009-08-06
656
0007322127
9780007322121
N/A
Book picture is for illustrative purposes only, actual binding, cover or edition may vary.
This is a used book - there is no escaping the fact it has been read by someone else and it will show signs of wear and previous use. Overall we expect it to be in very good condition, but if you are not entirely satisfied please get in touch with us.