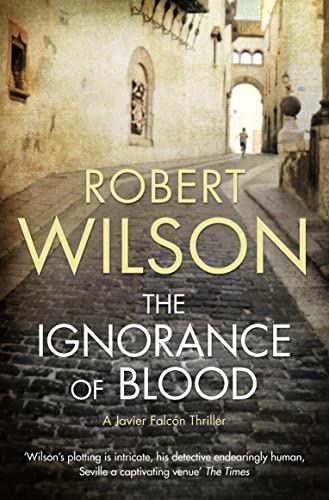 The Ignorance of Blood
by Robert Wilson

A new psychological thriller in the Javier Falcon quartet, that includes THE HIDDEN ASSASSINS and The Blind Man of Seville.

The Ignorance of Blood Summary

The Ignorance of Blood by Robert Wilson

A new psychological thriller in the Javier Falcon quartet, that includes THE HIDDEN ASSASSINS and The Blind Man of Seville.

The sweltering city of Seville is still recovering from a shocking and unsolved terrorist attack but now a spectacular car crash brings to light another threat. A dead gangster and a suitcase filled with millions in cash means the prospect of a serious Russian mafia presence on Inspector Jefe Javier Falcon's beat.

As a turf war erupts, Falcon finds himself and those closest to him personally targeted by the lethal forces suddenly unleashed. In the face of such a brutal attack, Falcon decides to retaliate with a ruthlessness that surprises him as much as his adversaries - but it will come at a tragic price.

The Ignorance of Blood Reviews

Praise for `The Ignorance of Blood':

`This is a big, serious thriller with echoes of Le Carre...Wilson writes with an impressive sense of inside knowledge, both about contemporary Seville and about its criminal underbelly' Andrew Taylor, The Spectator

`The complex narrative contains several set-pieces of breathless brutality and twists and turns like a bull tormented by picadors. This is crime-writing for grown-ups' Sunday Telegraph

`The last in the fine quartet... a fitting end to an absorbing, well-written series' The Times

`A writer of sharp psychological insights.... This is the final book in Wilson's much-acclaimed Javier Falcon quartet... but such is the skill with which he has drawn us into Javier Falcon's world that he is leaving us hungry for more forays into Seville's dangerous underworld' Daily Express

`[Wilson] has given the twists and turns of a thriller a pleasingly idiosyncratic national context, as the crooks on the Costa del Sol invade Seville' TLS

`A hard-edged finale to a crime series that succeeds in being shocking and sensitive, intriguing and electrifying, all at the same time' Northern Echo

`His writing is always trenchant and pity, his characters heroic and damaged, his descriptions of Spain resonant and prescient. A great contemporary thriller' Catholic Herald

Robert Wilson was born in 1957. A graduate of Oxford University, he has worked in shipping and advertising in London and trading in West Africa. He is married and divides his time between England, Spain and Portugal.

GOR001411127
The Ignorance of Blood by Robert Wilson
Robert Wilson
Used - Very Good
Paperback
HarperCollins Publishers
2009-08-06
400
0007202954
9780007202959
N/A
Book picture is for illustrative purposes only, actual binding, cover or edition may vary.
This is a used book - there is no escaping the fact it has been read by someone else and it will show signs of wear and previous use. Overall we expect it to be in very good condition, but if you are not entirely satisfied please get in touch with us.