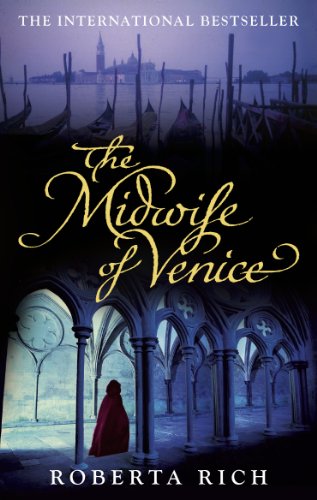 The Midwife of Venice
by Roberta Rich

It was on such a night that the men came for Hannah.

Hannah Levi is famed throughout Venice for her skills as a midwife but, as a Jew, the law forbids her from attending a Christian woman.
Like New Very Good Good
Only 1 left

The Midwife of Venice Summary

The Midwife of Venice by Roberta Rich

At midnight, the dogs, cats, and rats rule Venice. The Ponte di Ghetto Nuovo, the bridge that leads to the ghetto, trembles under the weight of sacks of rotting vegetables, rancid fat, and vermin. Seeping refuse on the streets renders the pavement slick and the walking treacherous.

It was on such a night that the men came for Hannah.

Hannah Levi is famed throughout Venice for her skills as a midwife but, as a Jew, the law forbids her from attending a Christian woman.

However, when the Conte appears at her door in the dead of night, Hannah's compassion is sorely tested. And with the handsome reward he is offering, she could ransom back her husband, currently imprisoned on the island of Malta.

But if she fails in her endeavours to save mother and child, will she be able to save herself, let alone her husband?

The Midwife of Venice Reviews

A lavishly detailed historical novel * Elle Magazine *
A lively tale involving love, blackmail, family, murder, plague, intercultural compassion, dramatic last-minute rescues and some very creative disguises . . . Rich capably depicts the strength of women and the precariousness of their lives, regardless of status or religion * The Globe and Mail *
A compelling and engaging novel, a well-researched high-stakes drama written with elegance and compassion: fascinating! * Sandra Gulland *

* William Deverell *
Not only did Roberta Rich transport me to sixteenth-century Venice, with its seductive tapestry of smells, sights, textures and beliefs, she involved me in a poignant story of seasoned love. I don't know which I admired more - the wonderfully realized setting or the suspenseful story of Hannah and Isaac * Katherine Ashenburg *

Roberta Rich divides her time between Vancouver and Colima, Mexico. She is
a former family law lawyer. This is her debut novel.

GOR010506588
The Midwife of Venice by Roberta Rich
Roberta Rich
Used - Like New
Paperback
Ebury Publishing
2011-10-15
352
0091944902
9780091944902
N/A
Book picture is for illustrative purposes only, actual binding, cover or edition may vary.
This is a used book - there is no escaping the fact it has been read by someone else and it will show signs of wear and previous use. Overall we expect it to be in very good condition, but if you are not entirely satisfied please get in touch with us.