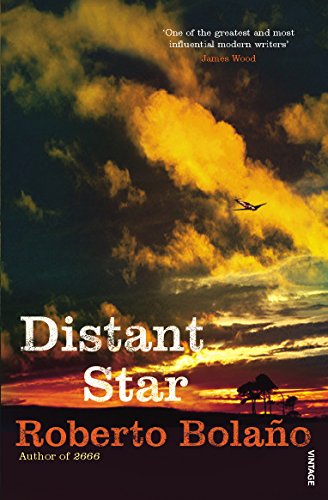 An unnamed narrator attempts to piece together the life and works of an enigmatic would-be poet turned military assassin during Pinochet's regime in Chile.

An unnamed narrator attempts to piece together the life and works of an enigmatic would-be poet turned military assassin during Pinochet's regime in Chile. In the early 1970s Alberto Ruiz-Tagle was a little-known poet living in southern Chile. After the military coup of 1973 that brought in the dictatorship of General Pinochet, he embarked upon a new career that involved him in committing murder and other brutalities, and subsequently led to his emergence as a lieutenant in the Chilean air force under his actual name, Carlos Wieder.

Some time later the narrator, now held in a prison camp, looks up and sees a World War II airplane writing the first words of the Book of Genesis in smoke in the sky. The aviator is none other Carlos Wieder, launching his own version of the New Chilean Poetry...

Roberto Bolano's novel is a chilling investigation of the fascist mentality and the limits of evil, as seen in its effects on a literary sensibility, as well as a gripping intellectual thriller.

The most influential and admired novelist of his generation in the Spanish-speaking world
One of the greatest and most influential modern writers
Invested with a rare belief in literature's importance, his enigmatic stories encompass deep feeling and extreme violence * Guardian *
Strenth, humour and brilliancecharacterise the work of Roberto Bolano...[and] the absolute masterpieces that are Distant Star and By Night in Chile
Bolano's language, alert and always graceful, his way of constructing narratives that are simultaneously disconcerting, brilliant and infinitely immediate, is a form of resisting evil, adversity and mediocrity * Le Monde *

Roberto Bolano was born in Santiago, Chile in 1953 and died in Catalonia in 2003. He was widely regarded as the essential Latin American writers of our age. He was best known for his novels (including The Savage Detectives, which won a number of prestigious literary awards, Nocturno de Chile, translated as By Night in Chile, Amulet, and 2666) and his short stories, Last Evenings on Earth.

GOR002011468
Distant Star by Roberto Bolano
Roberto Bolano
Used - Very Good
Paperback
Vintage Publishing
2009-07-02
160
0099461722
9780099461722
N/A
Book picture is for illustrative purposes only, actual binding, cover or edition may vary.
This is a used book - there is no escaping the fact it has been read by someone else and it will show signs of wear and previous use. Overall we expect it to be in very good condition, but if you are not entirely satisfied please get in touch with us.