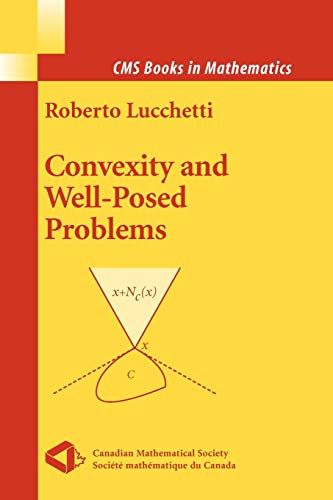 We shall consider convex functions from the most modern point of view: a function is de?ned to be convex whenever its epigraph, the set of the points lying above the graph, is a convex set. Except for trivial cases, the minimum value must be taken at a point where the function is not +?, hence at a point in the constraint set.

This book deals mainly with the study of convex functions and their behavior from the point of view of stability with respect to perturbations. We shall consider convex functions from the most modern point of view: a function is de?ned to be convex whenever its epigraph, the set of the points lying above the graph, is a convex set. Thus many of its properties can be seen also as properties of a certain convex set related to it. Moreover, we shall consider extended real valued functions, i. e. , functions taking possibly the values?? and +?. The reason for considering the value +? is the powerful device of including the constraint set of a constrained minimum problem into the objective function itself (by rede?ning it as +? outside the constraint set). Except for trivial cases, the minimum value must be taken at a point where the function is not +?, hence at a point in the constraint set. And the value ?? is allowed because useful operations, such as the inf-convolution, can give rise to functions valued?? even when the primitive objects are real valued. Observe that de?ning the objective function to be +? outside the closed constraint set preserves lower semicontinuity, which is the pivotal and mi- mal continuity assumption one needs when dealing with minimum problems. Variational calculus is usually based on derivatives.

"In this book the author focuses on the study of convex functions and their properties under perturbations of data. In particular, he illustrates the ideas of stability and well-posedness and the connections between them. ... This book is intended for graduate students and researchers especially in mathematics, physics and economics; to facilitate its use as a textbook, the author has included many exercises and examples of different levels of difficulty." (Davide La Torre, Mathematical Reviews, Issue 2006 h)

"This book studies convex functions in Banach spaces and the stable behavior under perturbations of the optimization problems associated to them. ... An interesting feature of the book is the inclusion of some topics, like elements of game theory, hypertopologies and genericity of well-posedness, not usually found in textbooks devoted to convexity and optimization. ... several useful examples, comments and remarks scattered throughout, and over 120 exercises of varying level difficulty. This book is suitable for graduate courses on convex optimization from a mathematical standpoint." (Tullio Zolezzi, Zentralblatt MATH, Vol. 1106 (8), 2007)

Convex sets and convex functions: the fundamentals.- Continuity and ?(X).- The derivatives and the subdifferential.- Minima and quasi minima.- The Fenchel conjugate.- Duality.- Linear programming and game theory.- Hypertopologies, hyperconvergences.- Continuity of some operations between functions.- Well-posed problems.- Generic well-posedness.- More exercises.
NLS9781441921116
9781441921116
1441921117
Convexity and Well-Posed Problems by Roberto Lucchetti
Roberto Lucchetti
CMS Books in Mathematics
New
Paperback
Springer-Verlag New York Inc.
2010-11-24
305
N/A
Book picture is for illustrative purposes only, actual binding, cover or edition may vary.
This is a new book - be the first to read this copy. With untouched pages and a perfect binding, your brand new copy is ready to be opened for the first time
Trustpilot