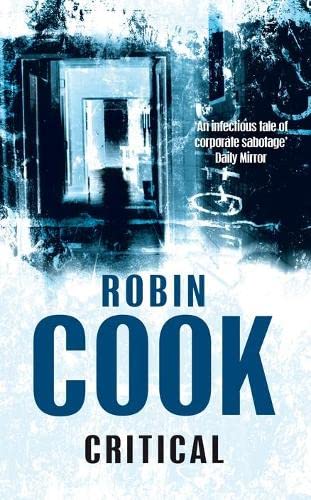 In Critical, Robin Cook delivers a heart-pounding medical thriller of murder and mayhem, car chases and corpses, and a shock twist ending.

Angela Dawson M.D. appears to have it all: at thirty-seven, she owns a fabulous New York City apartment, a stunning seaside house on Nantucket, and enjoys the perks of her prosperous lifestyle. With her controlling interest in three busy specialty hospitals in NYC and plans for others in Miami and Los Angeles, Angela's future looks very bright. But her climb to the top was rough, marked by a troubled childhood, a failed marriage, and the devastating blow of bankruptcy.

Then a surge of drug-resistant staph infections in all three hospitals devastates Angela's carefully constructed world. Not only do the infections result in patient deaths, but the fatalities cause stock prices to tumble. Will Angela be able to hold her empire together?

Medical examiners Laurie Montgomery and Jack Stapleton are professionally and personally intrigued by these deaths. With Jack facing surgery in one of the hospitals to repair a torn ligament, Laurie can't help investigating, opening a Pandora's box of corporate intrigue that threatens not just her livelihood, but her life with Jack as well.

GOR001422659
Critical by Robin Cook
Robin Cook
Jack Stapleton and Laurie Montgomery
Used - Good
Paperback
Pan Macmillan
2008-08-01
277
0330457543
9780330457545
N/A
Book picture is for illustrative purposes only, actual binding, cover or edition may vary.
This is a used book - there is no escaping the fact it has been read by someone else and it will show signs of wear and previous use. Overall we expect it to be in very good condition, but if you are not entirely satisfied please get in touch with us.