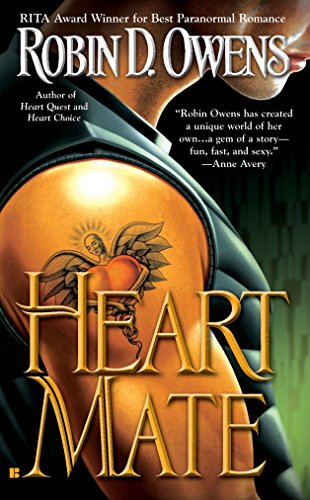 Used Price
$14.49
inc. GST
Free Shipping in Australia
The very first novel in the Celta futuristic romance series--a RITA Award( winner for Best Paranormal Romance--is now reissued. Set on a planet where psychic abilities are the norm, "HeartMate" is the story of how two people find that love is the most unexpected pleasure of all.
Very Good

All his life, Rand T'Ash has looked forward to meeting his HeartMate, with whom he could begin a family. Once a street tough, now a respected nobleman and artisan, he has crafted the perfect HeartGift, which, in the custom of the psychically gifted population of the planet Celta, is the way a man finds--and attracts--his wife...

Danith Mallow is irresistibly drawn to the magnificent necklace on display in T'Ash's shop, but she is wary of its creator, despite an overpowering attraction. In a world where everyone is defined by their psychic ability, Danith has little, placing her at the opposite end of the social spectrum from T'Ash. But T'Ash refuses to accept her rejection and sees it as a challenge instead. They are HeartMates, but can T'Ash persuade his beloved to accept her destiny by his side?

"Robin Owens has created a unique world of her own...a gem of a story--fun, fast, and sexy."--Anne Avery"Engaging characters, effortless world-building, and a sizzling romance make this a novel that's almost impossible to put down."--The Romance Reader

"Fantasy romance with a touch of mystery . . . Readers from the different genres will want Ms. Owens to return to Celta for more tales of HeartMates."--Midwest Book Review

"HeartMate is a dazzling debut novel. Robin D. Owens paints a world filled with characters who sweep readers into an unforgettable adventure with every delicious word, every breath, every beat of their hearts. Brava!"--Deb Stover, award-winning author

"It shines and fans will soon clamor for more . . . A definite keeper!"--The Bookdragon Review

"This story is magical . . . doubly delicious as it will appeal to both lovers of fantasy and futuristic romance. Much room has been left for sequels."--PNR Reviews

GOR002100036
Heartmate by Robin D. Owens
Robin D. Owens
Used - Very Good
Paperback
Penguin Putnam Inc
2006-08-01
352
0425212408
9780425212400
N/A
Book picture is for illustrative purposes only, actual binding, cover or edition may vary.
This is a used book - there is no escaping the fact it has been read by someone else and it will show signs of wear and previous use. Overall we expect it to be in very good condition, but if you are not entirely satisfied please get in touch with us.