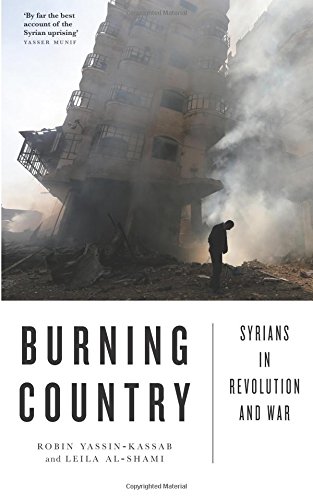 In Stock
$21.49
inc. GST
A vivid and groundbreaking look at a modern-day political and humanitarian nightmare.
Well Read
Only 1 left

*Shortlisted for the Rathbones Folio Prize 2017*

In 2011, many Syrians took to the streets of Damascus to demand the overthrown of the government of of Bashar al-Assad. Today, much of Syria has become a warzone where foreign journalists find it almost impossible to report on life in this devastated land.

Burning Country explores the horrific and complicated reality of life in present-day Syria with unprecedented detail and sophistication, drawing on new first-hand testimonies from opposition fighters, exiles lost in an archipelago of refugee camps, and courageous human rights activists among many others. These stories are expertly interwoven with a trenchant analysis of the brutalisation of the conflict and the militarisation of the uprising, of the rise of the Islamists and sectarian warfare, and the role of governments in Syria and elsewhere in exacerbating those violent processes.

With chapters focusing on ISIS and Islamism, regional geopolitics, the new grassroots revolutionary organisations, and the worst refugee crisis since World War Two, Burning Country is a vivid and groundbreaking look at a modern-day political and humanitarian nightmare.

'Extraordinary ... the book on Syria I was waiting for' -- Molly Crabapple, artist, author, journalist
'Gripping ... Cutting through the fog of geopolitics, [Burning Country] refocuses the conflict with the people at its centre' -- Brian Whitaker, Newsweek
'A detailed history of Syria's moderate opposition and a meticulous analysis of the origins of today's violent dynamics' -- New Statesman
'Explores how Syria's peaceful uprising gave way to armed insurgency and sectarian jihad... This is an important, honest and insightful book, well worth anyone's time' -- Marc Lynch, Washington Post
'Avoids the easy indulgence of indignation; instead, it elicits the voices of many different Syrians involved in the uprising, acknowledging their suffering as well as their courage, intelligence, and humanity, while explaining the terrible choices that have been forced on them' -- Ursula Lindsey, The Nation
'The most succinct and convincing insider's narrative of the uprising' -- Richard Spencer - Daily Telegraph
'Vital' -- Peter Geoghegan - The Herald Scotland
'Full of fascinating details' -- Robyn Cresswell - The New York Review of Books
'For decades Syrians have been forbidden from telling their own stories and the story of their country, but here Robin Yassin-Kassab and Leila al-Shami tell the Syrian story' -- Yassin al-Haj Saleh, Syrian writer, intellectual, and former political prisoner
'By far the best account of the Syrian uprising yet' -- Dr. Yasser Munif, professor of sociology at Emerson College, co-founder of the Global Campaign of Solidarity with the Syrian Revolution

List of Abbreviations Acknowledgements Preface Maps 1. Revolution from Above 2. Bashaar's First Decade 3. Revolution from Below 4. The Grassroots 5. Militarisation and Liberation 6. Scorched Earth: The Rise of the Islamisms 7. Dispossession and Exile 8. Culture Revolutionised 9. The Failure of the Elites 10. The Start of Solidarity Epilogue: October 2015 Further Reading Notes Index

GOR010725625
Burning Country - Old Edition: Syrians in Revolution and War by Robin Yassin-Kassab
Robin Yassin-Kassab
Used - Well Read
Paperback
Pluto Press
2016-11-30
288
0745336221
9780745336220
N/A
Book picture is for illustrative purposes only, actual binding, cover or edition may vary.
This is a used book. We do our best to provide good quality books for you to read, but there is no escaping the fact that it has been owned and read by someone else previously. Therefore it will show signs of wear and may be an ex library book.