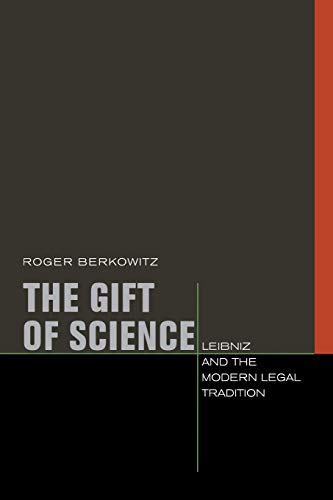 The Gift of Science by Roger Berkowitz

The front pages of our newspapers and the chatter on the blogs bear witness to the divorce of law from justice. Moving from the scientific revolution to the rise of law and economics, this title tells the story of how lawyers invented a science of law to preserve law's claim to moral authority.

The Gift of Science: Leibniz and the Modern Legal Tradition by Roger Berkowitz

The front pages of our newspapers and the chatter on the blogs bear witness to the divorce of law from justice. Highly paid lawyers mine the law for loopholes to help Fortune 500 corporations legally evade their taxes and spoil the environment. In a world governed by the rule of law, justice, it seems, is a chimera, an abstraction, and thus a distraction from the real world struggle over political interest. Ought we, then, to abandon talk about abstract ideals of justice in favor of strategic and political arguments?
In The Gift of Science, a bold, revisionist account of 300 years of jurisprudence, Roger Berkowitz argues that the idea of justice is endangered and needs to be saved. Moving from the scientific revolution to the rise of law and economics, Berkowitz tells the story of how lawyers invented a science of law to preserve law's claim to moral authority. The "gift" of science to law, however, proved bittersweet. Instead of strengthening the bond between law and justice, the subordination of law to science transformed law from an ethical order into a tool for social and economic ends.
The Gift of Science is a mesmerizing and original intellectual history of law. As a genealogy of the modern divorce of law from justice, Berkowitz shows that positive law has its formative impulse not in the English works of Thomas Hobbes and John Austin, but in the German tradition of legal science stretching from Gottfried Wilhelm Leibniz to Friedrich Carl von Savigny and Rudolf von Jhering. As a contribution to jurisprudence, Berkowitz argues that positive law is best understood as a product of science and not, as usually thought, as the will of a sovereign. As a work of political theory, Berkowitz explores how the subordination of law to social science has hollowed out the ethical center of law as the institutional embodiment of justice. Finally, the book makes manifest the danger that the transformation of law itself into a product of science poses for the possibility of law, justice, and freedom in the modern age.

Berkowitz offers not only a necessary rethinking of Leibniz's legal thought, but also a tremendously insightful and nuanced account of the intellectual history of modern codification and legal positivism.----Karl Shoemaker, University of Wisconsin, Madison
An extremely original treatment of the 18th century codification movement as an attempt to find a rational, non-religious ground for law. Clearly and elegantly written, it makes insightful and unique connections between the scientific revolution and the codification movement.----Linda Meyer, Quinnipiac University School of Law

Roger Berkowitz's book is one of the richest guides available in English to German legal thought from the mid-17th to the early 19th century, a crucial period in the origins of modern law, not least because of the powerful radiance of the German example elsewhere. A model of philosophically inspired intellectual history, Berkowitz's book is
sure to inspire continuing debate.

"The Gift of Science is the most searing critique of legal positivism that
we have available to us."

----Drucilla Cornell, University of Capetown
Offers careful, erudite translations of key texts in jurisprudence as well as original interpretations of such works that realign the larger disciplinary field toward proper understanding of the essential debates within law and philosophy.----Kenneth Michael Panfilio, Illinois State University
Provides a radical critique of legal positivism from the perspective of intellectual history. Focusing on little known work by Liebniz, Berkowitz traces the complex history and the multiple meanings of science and positivity.----Peter Goodrich, Cardozo School of Law
Roger Berkowitz is the Academic Director of the Hannah Arendt Center for Politics and Humanities and Associate Professor of Politics, Human Rights, and Philosophy at Bard College.
GOR011228626
9780823231911
0823231917
The Gift of Science: Leibniz and the Modern Legal Tradition by Roger Berkowitz
Roger Berkowitz
Just Ideas
Used - Like New
Paperback
Fordham University Press
2010-03-15
234
N/A
Book picture is for illustrative purposes only, actual binding, cover or edition may vary.
The book has been read, but looks new. The book cover has no visible wear, and the dust jacket is included if applicable. No missing or damaged pages, no tears, possible very minimal creasing, no underlining or highlighting of text, and no writing in the margins
Trustpilot