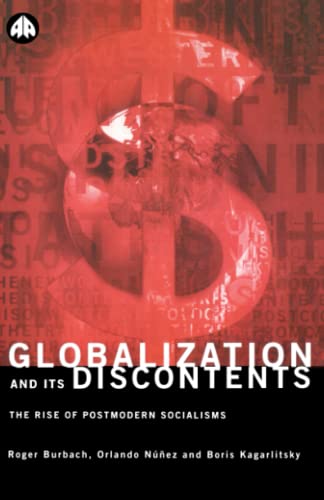 Globalization and Its Discontents
by Roger Burbach

Used Price
$17.99
inc. GST
Free Shipping in Australia
A critical view of globalisation which analyses the devastating impact of neoliberalism in the post-communist world
Very Good

Globalization and Its Discontents Summary

Globalization and Its Discontents: The Rise of Postmodern Socialisms by Roger Burbach

The decisive event of the late twentieth century has been the collapse of communism and the perceived triumph of capitalism. Written by authors from the First, former Second, and Third Worlds, this book reveals the characteristics and flaws of the late capitalist order.

The authors explore the societal polarisation produced by globalisation, the crisis of Western ideology, and the soft financial underbelly of globalisation that could well bring us to an economic collapse. The perspective of this provocative book goes beyond those of the traditional left and the relativist, anti-historical school of postmodernism to offer an entirely fresh view of the world order.

Globalization and Its Discontents Reviews

'An insightful portrayal of the world at the end of the century which provides ideas and information that can be used to construct an alternative world' -- Eduardo Galeano
'An excellent antidote to the complacency generated by the mass media and politicians who claim that 'we never had it so good' -- New Renaissance
'A courageous, at times audacious, reflection on the future of the left. Required reading for the dark times ahead' -- Mike Davis, author of City of Quartz

Roger Burbach is Director of the Center for the Study of the Americas. He has written extensively on Latin America, US politics, and on post-communist societies and is the author, with Octavio Nunez and Boris Kagarlitsky, of Globalization and its Discontents: The Rise of Postmodern Socialisms (Pluto, 1996). Orlando Nunez was a leading strategist in the Nicaraguan Sandinista government in the 1980s and was a member of the Sandinista's Assembly until their defeat. He now he heads CIPRES, a centre promoting sustainable agriculture. Boris Kagarlitsky is a senior research fellow in the Institute for Comparative Political Studies, the Russian Academy of Sciences. He was a political prisoner under Brezhnev and latterly has been an adviser to the Chair of the Federation of Independent Trade Unions of Russia. He is the author of Russia Under Yeltsin and Putin (Pluto, 2002), The Politics of Empire (Pluto, 2004) and Empire of the Periphery (Pluto, 2007).

Preface 1. Back to the future 2. The New World Disorder 3. The Crisis of Western Ideology 4. Globalisation's Economic Shock 5. The trauma of the Third World 6. Decomposition in the United States 7. The Post Communist World: From Crisis to Catastrophe 8. Visions Old and new 9. The Long Transition to Postmodern Socialism Notes Index

GOR006002260
Globalization and Its Discontents: The Rise of Postmodern Socialisms by Roger Burbach
Roger Burbach
Used - Very Good
Paperback
Pluto Press
1996-11-12
192
0745311709
9780745311708
N/A
Book picture is for illustrative purposes only, actual binding, cover or edition may vary.
This is a used book - there is no escaping the fact it has been read by someone else and it will show signs of wear and previous use. Overall we expect it to be in very good condition, but if you are not entirely satisfied please get in touch with us.