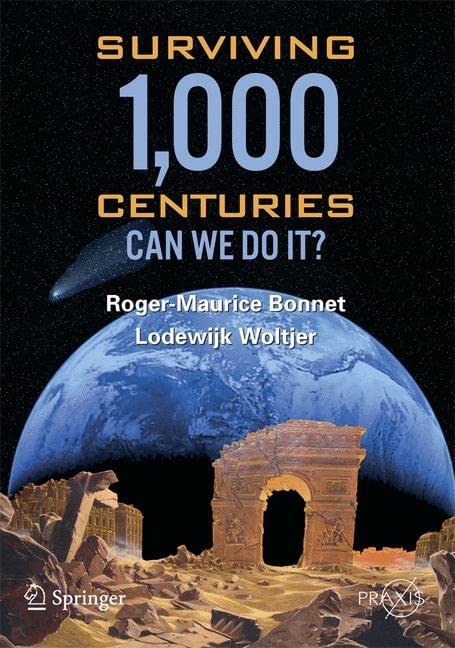 This full color book provides a quantitative view of our civilization over the next 100,000 years. The authors present the dangers and stress the importance of taking decisions in the 21st century to ensure the long-term survival of people on Earth.

Surviving 1000 Centuries: Can We Do It? by Roger Maurice Bonnet

The circumstances that will shape the long-term future of our planet will be constrained by what is physically possible and what is not. This full color book provides a quantitative view of our civilization over the next 100,000 years, in comparison to the 40-60,000 years it took for modern humans to emerge from Africa, on the basis of contemporary scientific and technological knowledge. The evolution of the Earth's atmosphere and the origin of water are highlighted as the most important factors for the emergence and the development of life.

The authors consider both cosmic and natural hazards, pointing out that scientific information provided by satellites and communication systems on the ground could prevent many unnecessary casualties by forward planning and the installation of elementary precautions. The Earth's evolving climate is considered, showing how greenhouse gases have played an important role in the past climate, whereas human industrial and agricultural emissions will greatly impact our future.

"A good initial feeling for the thesis of the book can be obtained simply by reading the ... chapters. ... the authors turn to threats to survival from outside (from nearby supernovae to asteroid impact) and from inside (disease, seismic events, and climatic hazards), before turning to the current burning issue of climate change, both past and future. ... This is a fascinating and challenging book which is published at just the right moment. It should be required reading for all politicians ... ." (Robert Connon Smith, The Observatory, Vol. 129 (1210), June, 2009)

Dr R M Bonnet and Dr L Woltjer are outstanding, internationally renowned scientists. During his long tenure at the European Space Agency, Dr Bonnet has directed the launch of 17 artificial scientific satellites, initiating the development of the Huygens probe placed on the NASA Cassini Saturn Orbiter which landed on Titan on 14 January 2005, developing the successful Mars Express mission and directing the SMART-1 European lunar mission. He is President of COSPAR and Executive Director of ISSI and has acquired a world reputation in the field of space politics. After 11 years at Columbia University, NY, Dr Woltjer returned to Europe as Director General of ESO for 13 years. Since then he has worked closely with the Observatories de Haute Provence in France and the University of Florence in Italy, was President of the International Astronomical Union and Chairman of the Space Science Advisory Committee of ESA for 4 years.

A Brief History of the Earth.- Cosmic Menaces.- Terrestrial Hazards.- The Changing Climate.- Climate Futures.- The Future of Survivability: Energy and Inorganic Resources.- The Future of Survivability: Water and Organic Resources.- Leaving Earth: From Dreams to Reality?.- Managing the Planet's Future: The Crucial Role of Space.- Managing the Planet's Future: Setting-Up the Structures.- Conclusion.

GOR010243570
Surviving 1000 Centuries: Can We Do It? by Roger Maurice Bonnet
Roger Maurice Bonnet
Popular Science
Used - Very Good
Hardback
Springer-Verlag New York Inc.
2008-07-30
422
0387746331
9780387746333
N/A
Book picture is for illustrative purposes only, actual binding, cover or edition may vary.
This is a used book - there is no escaping the fact it has been read by someone else and it will show signs of wear and previous use. Overall we expect it to be in very good condition, but if you are not entirely satisfied please get in touch with us.