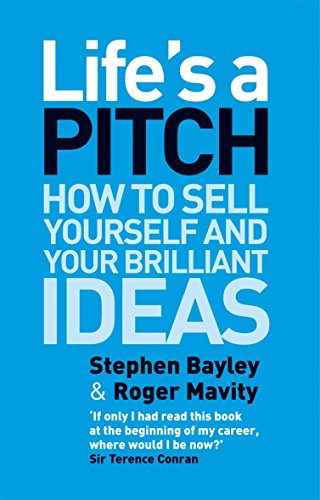 Life's a Pitch
by Roger Mavity

In Stock
$10.99
+10% GST
The pitch is the absolute essence of modern business.Part inspirational manual for business, part guidebook to a successful and happy social life, Life's a Pitch is written as the result of an accumulated half century of (mostly successful) pitching by the authors.
Very Good Good
14 in stock

Life's a Pitch: How to Sell Yourself and Your Brilliant Ideas by Roger Mavity

The pitch is the absolute essence of modern business. Ideas are the most valuable commodity in the modern economy and it is human skill which develops them. In pitching for new business, ideas and emotional intelligence dominate. However the skills of the pitch are not only relevant to the world of business, rather they apply to just about every significant personal transaction in your life... Life's a Pitch is the ultimate how-to book - a mixture of mechanics and magic. Nothing like it has been written before. A mixture of mentoring, graphics, anthropology, market research and modern Machiavellianism, this book will prepare you for success. So whether at a sales conference in corporate conference room hell or over lunch at a glamourous restaurant, Life's a Pitch tells you how to handle human transactions. A pitch is not a meeting, it's a drama. A pitch is not about transferring information, it's about transferring power. It is business, but it is also theatre. And the results of a successful pitch are - quite simply but rather persuasively - money and power. Part inspirational manual for business, part guidebook to a successful and happy social life, Life's a Pitch is written as the result of an accumulated half century of (mostly successful) pitching by the authors. Ground-breaking and genre-busting, it will transform the way you think about the art of persuasion for ever.

Stephen Bayley first became famous as an authority on style and design when Sir Terence Conran chose him to head up the Boilerhouse at the V&A, Britain's first permanent exhibition of design. He then went on to become the first Chief Executive of the Design Museum and he is now a celebrated, outspoken broadcaster and critic, author of 12 books and consultant on design and presentation to companies such as Ford and Coca-Cola. Roger Mavity is the Chief Executive of Conran Holdings. In the past he has run his own advertising company, pitching successfully for business from the likes of Honda, Minolta and Burberry. He then became Chief Executive of Granada Leisure before masterminding the company's successful pitch to the City to buy the Forte Group - still the largest hostile takeover bid in British commercial history.

GOR001642615
Life's a Pitch: How to Sell Yourself and Your Brilliant Ideas by Roger Mavity
Roger Mavity
Used - Very Good
Paperback
Transworld Publishers Ltd
2008-09-11
304
0552156833
9780552156837
N/A
Book picture is for illustrative purposes only, actual binding, cover or edition may vary.
This is a used book - there is no escaping the fact it has been read by someone else and it will show signs of wear and previous use. Overall we expect it to be in very good condition, but if you are not entirely satisfied please get in touch with us.