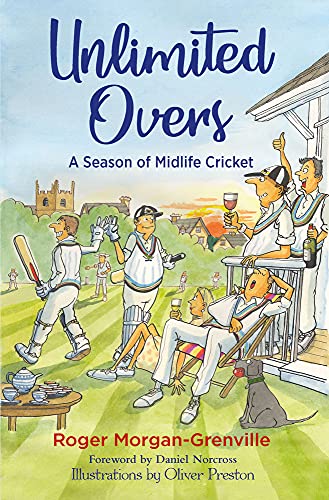 Unlimited Overs is the humorous and heartwarming story of a season with the White Hunter Cricket Club, as they go from disaster to triumph.

Above all, it is the uplifting tale of friendship among a team of not-very-good players who find enough moments of near brilliance to remind them why they love the game of cricket.

Unlimited Overs: A Season of Midlife Cricket by Roger Morgan-Grenville

As Roger Morgan-Grenville prepares for a new season with the White Hunter Cricket Club, he is starting to feel his age, so he embarks on a secret plan of coaching, yoga and psychology to improve his game. Will he emerge as a sporting demigod, or will his teammates even notice the difference.

This is the humorous and heartwarming story of that cricket season, as the White Hunters go from disaster to triumph. It is a tale of competitiveness, suspense, excellence, hospitality and incompetence, such as the missing fielder found asleep in the woods and the two opening bowlers whose MG Roadster breaks down on the way to the game.

From the Castle Ground at Arundel to a field next to a nudist camp in France, players such as the Tree Hugger, the Gun Runner, and their wicket-keeper, the Human Sieve, share the dream that this might be their day. Above all, it is the uplifting story of friendship among a team of not-very-good players who find enough moments of near brilliance to remind them why they turn up for more, game after game, season after season.

This book is for the people that make cricket both possible and the most magical game on earth, and yes, very possibly better than sex. -- Daniel Norcross
Ever self-deprecating, R M-G has nailed his whimsical colours to the mast with his latest volume on the trials of the legendary White Hunters CC. His turn of phrase is without parallel. Who else would or could come up with the line, "Clinging on to my innings like a sloth to the underside of a Cecopria tree"? -- David Gower
Where Roger strikes a real and often hilarious chord is his take on what you'd call the theatricals of cricket, the anecdotes and vignettes which make it such an enjoyable and perplexing game... But for those 750,000 dedicated amateurs that play cricket, and for the many more who used to play the game but can no longer, and yet still listen avidly to Test Match Special in the uncertain hours to watch the Ashes in Australia, this is a book that bears affectionate witness to a noble game that continues to bewitch. After all, who would prefer to score a goal for England rather than hold his bat aloft after scoring a century at Lord's? -- Paul de Zulueta * The Guards Magazine *
Unlimited Overs is a wryly amusing tale of 'friendship, dynasty, defiance and hope...' -- RE * Country Life *
Roger Morgan-Greville's latest book delivers another lively collection of musings about the summer game. * Winchester Today *

Roger Morgan-Grenville and a friend set up the White Hunter Cricket Club in 1986 because they weren't good enough for 'proper' cricket, but were desperate to go on playing. With a career batting average of 13.46, and a bowling average that is too awful to set down on paper, Roger and his teammates have now become a regular summer sight on some of the most feted grounds in the country, losing with dignity and sometimes winning with astonished surprise.

Foreword Introduction 1. The Librarians 2. A Secret Plan 3. The Pathway of Four Improvements 4. College Days 5. Metamorphosis 6. Beauty and the Sieve 7. The Flowers of Middle Summer 8. Village Politics 9. When the Rains Came 10. Alstonefield 11. The Finer Points of Nudity 12. Monkey Shoulder 13. Close of Play Acknowledgements

GOR009973744
Unlimited Overs: A Season of Midlife Cricket by Roger Morgan-Grenville
Roger Morgan-Grenville
Used - Very Good
Hardback
Quiller Publishing Ltd
2019-03-28
216
1846892929
9781846892929
N/A
Book picture is for illustrative purposes only, actual binding, cover or edition may vary.
This is a used book - there is no escaping the fact it has been read by someone else and it will show signs of wear and previous use. Overall we expect it to be in very good condition, but if you are not entirely satisfied please get in touch with us.