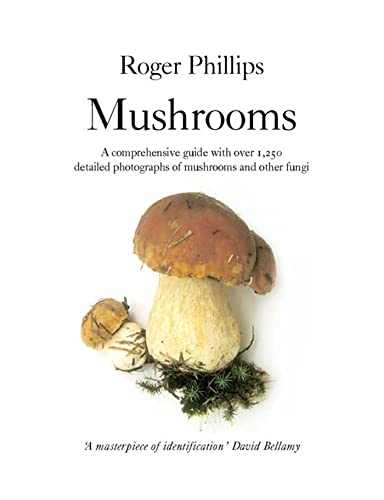 Out of Stock
$32.99
inc. GST
A beautiful and comprehensive guide to mushroom identification with over 1,250 detailed photographs of mushrooms and other fungi.
Very Good
Only 0 left

The culmination of over thirty years' work, Roger Phillips's authoritative and superbly illustrated reference work is packed with information and original photographs. The essential illustrated mycological encyclopedia, this book is also clear, user friendly and will appeal to a wide range of readers.

Unsurpassed in both illustrative and descriptive detail, Mushrooms contains over 1,250 photographs, often showing the specimens in various stages of growth, and includes all the latest botanical and common names as well as current ecological information on endangered species.

Having sold more than 750,000 copies in Europe of his previous title on mushrooms, Roger Phillips's Mushrooms once again sets the benchmark. Quite simply, nobody with an interest in the subject can afford to be without this book.

Roger Phillips has written the best mushroom book I know: the sublime taxonomic accuracy of his descriptions and photographs, combined with an evangelical and infectious passion for the subject, will make an instant mycophile of anyone who picks it up. -- Hugh Fearnley-Whittingstall
A masterpiece of identification. -- David Bellamy

Roger Phillips is an award-winning photographer with a reputation spanning thirty years. He has consistently pioneered the use of colour photography for the reliable identification of natural history subjects, and has written numerous books dedicated to this purpose, including Roses and Herbs. Described as "Mr Mushrooms" because of his expertise in the field, Roger has written and presented two major six-part TV series on gardening (BBC & Channel 4). Famed for his ebullient personality and garish red glasses, he has become a well-recognized figure in the world of gardening.

GOR001984210
Mushrooms by Roger Phillips
Roger Phillips
Used - Very Good
Paperback
Pan Macmillan
2006-07-28
384
0330442376
9780330442374
N/A
Book picture is for illustrative purposes only, actual binding, cover or edition may vary.
This is a used book - there is no escaping the fact it has been read by someone else and it will show signs of wear and previous use. Overall we expect it to be in very good condition, but if you are not entirely satisfied please get in touch with us.