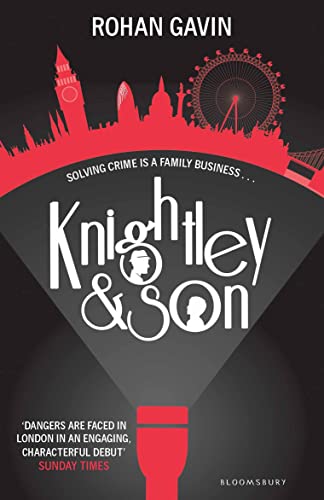 Knightley and Son
by Rohan Gavin

Knightley and Son by Rohan Gavin

Meet Knightley and Son - two great detectives for the price of one . . . Darkus Knightley is not your average thirteen-year-old: ferociously logical, super-smart and with a fondness for tweed, detective work is in his blood. His dad Alan Knightley was London's top private investigator and an expert in crimes too strange for Scotland Yard to handle, but four years ago the unexplained finally caught up with him - and he fell into a mysterious coma. Darkus is determined to follow in his father's footsteps and find out what really happened. But when Alan suddenly wakes up, his memory is wonky and he needs help. The game is afoot for Knightley & Son - with a mystery that gets weirder by the minute, a bestselling book that makes its readers commit terrible crimes, and a sinister organisation known as the Combination . . . A funny, warm, fantastical crime caper with an unlikely hero and a brilliant comic cast, perfect for fans of Sherlock and criminally good storytelling.

A rousing page-turner with one fault: It ends * Kirkus Reviews Best Children's Books of 2014 *
Dangers are faced in London in an engaging, characterful debut . . . with enjoyably convincing family relationships -- Nicolette Jones * Sunday Times, Pick of the Week *
Aimed at young adventurers, Rohan Gavin's Knightley & Son, for age 10+, perfectly combines comedy and crime-solving as young Doc Knightley tries to discover what caused his father, a private investigator, to fall into a coma. This is an engaging debut and the tweed-loving Doc is a young Holmes for our times * Daily Mail *
Full of suspense, intrigue and humour this is a modern day classic detective mystery * Guardian Best New Children's Books, Summer 2014 *
Heaps of mystery, dry humor and tweed abound in this exemplar of crime fiction a la Doyle ... A rousing page-turner with one fault: It ends * Kirkus Reviews, starred review *
A lively romp which will certainly please young readers * Books for Keeps *
This is a fun crime novel for young readers . . . hilarious and a bit scary, it's a good adventure * bookwitch.com *
Rohan Gavin has created a protagonist that readers will grow to love * bookzone4boys.com *
My inner twelve-year-old took to Darkus pretty much instantly ... it reminded me of the Artemis Fowl books ... I'd recommend for the young Sherlockian, crime aficionado, or action fan in anyone's life * Bakerstreetbabes.com *

Rohan Gavin is an author and screenwriter based in London. He is a huge fan of Sherlock Holmes and his enduring love of detective fiction, cars and conspiracy theories inspired him to write this book, the first in a series. Rohan is the son of award-winning children's author Jamila Gavin, and he recently became a father himself.

GOR005426726
Knightley and Son by Rohan Gavin
Rohan Gavin
Knightley and Son
Used - Very Good
Paperback
Bloomsbury Publishing PLC
2014-01-02
336
1408838915
9781408838914
N/A
Book picture is for illustrative purposes only, actual binding, cover or edition may vary.
This is a used book - there is no escaping the fact it has been read by someone else and it will show signs of wear and previous use. Overall we expect it to be in very good condition, but if you are not entirely satisfied please get in touch with us.