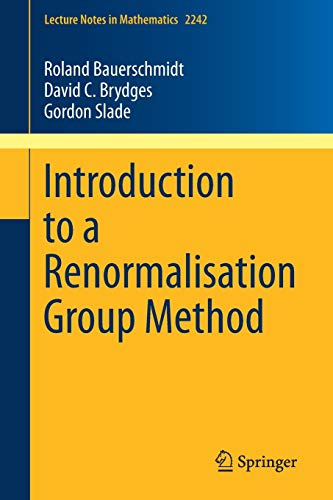 Introduction to a Renormalisation Group Method by Roland Bauerschmidt

Introduction to a Renormalisation Group Method by Roland Bauerschmidt

The book begins with critical behaviour and its basic discussion in statistical mechanics models, and subsequently explores perturbative and non-perturbative analysis in the renormalisation group. Lastly it discusses the relation of these topics to the self-avoiding walk and supersymmetry.

Including exercises in each chapter to help readers deepen their understanding, it is a valuable resource for mathematicians and mathematical physicists wanting to learn renormalisation group theory.

Roland Bauerschmidt is a University Lecturer in the Department of Pure Mathematics and Mathematical Statistics at the University of Cambridge. His work mainly focuses on the applications of probability theory and analysis to topics in statistical mechanics. He received his Ph.D. in Mathematics from the University of British Columbia in 2013, and was a member of the Institute for Advanced Study in Princeton at the School of Mathematics, and a postdoctoral researcher at Harvard University. He received the IUPAP Young Scientist Prize in 2015.

- Part I Spin Systems and Critical Phenomena. - Spin Systems. - Gaussian Fields. - Finite-Range Decomposition. - The Hierarchical Model. - Part II The Renormalisation Group: Perturbative Analysis. - The Renormalisation Group Map. - Flow Equations and Main Result. - Part III The Renormalisation Group: Nonperturbative Analysis. - The Tz-Seminorm. - Global Flow: Proof of Theorem 4.2.1. - Nonperturbative Contribution to U/+: Proof of Theorem 8.2.5. - Bounds on K/+ : Proof of Theorem 8.2.4. - Part IV Self-AvoidingWalk and Supersymmetry. - Self-AvoidingWalk and Supersymmetry. - Part V Appendices. - Appendix A: Extension to Euclidean Models. - Appendix B: Solutions to Exercises.
NLS9789813295919
9789813295919
9813295910
Introduction to a Renormalisation Group Method by Roland Bauerschmidt
Roland Bauerschmidt
Lecture Notes in Mathematics
New
Paperback
Springer Verlag, Singapore
2019-10-17
283
N/A
Book picture is for illustrative purposes only, actual binding, cover or edition may vary.
This is a new book - be the first to read this copy. With untouched pages and a perfect binding, your brand new copy is ready to be opened for the first time
Trustpilot