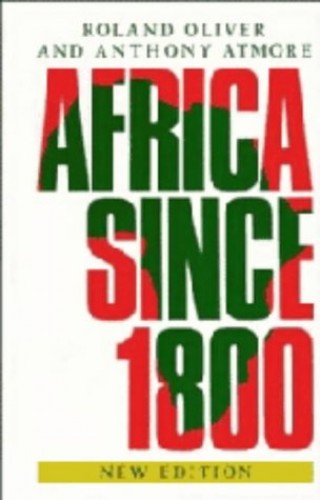 Africa since 1800
by Roland Oliver

In Stock
$13.49
+10% GST
This general history of modern Africa has been revised and updated to take full account of the fresh perspectives on African history brought about by the end of the Cold War.
Good Well Read
Only 2 left

Africa since 1800 by Roland Oliver

This history of modern Africa takes as its starting-point the year l800, because, although by that time the greater part of the interior of Africa had become known to the outside world, most of the initiatives for political and economic change still remained in the hands African rulers and their peoples. The book falls into three parts. The first describes the precolonial history of Africa, while the middle section deals thematically with partition and colonial rule. The third part deals with the emergence of the modern nation states of Africa and their history. Throughout the l90 years covered by the book, the authors are as concerned with the continuity of African history as with the changes which have taken place during this period. The new edition covers events up to the end of l99l and discusses the fresh perspectives brought about by the end of the Cold War.

'... the authors must be thoroughly congratulated for taking Africa seriously as a continent.' The Times Educational Supplement
'A highly readable work of reference and invaluable to all seeking a comprehensive picture of the continent's emergence in the past two centuries.' African Economic Digest

GOR002675281
Africa since 1800 by Roland Oliver
Roland Oliver
Used - Good
Paperback
Cambridge University Press
1994-01-27
320
0521429706
9780521429702
N/A
Book picture is for illustrative purposes only, actual binding, cover or edition may vary.
This is a used book - there is no escaping the fact it has been read by someone else and it will show signs of wear and previous use. Overall we expect it to be in very good condition, but if you are not entirely satisfied please get in touch with us.