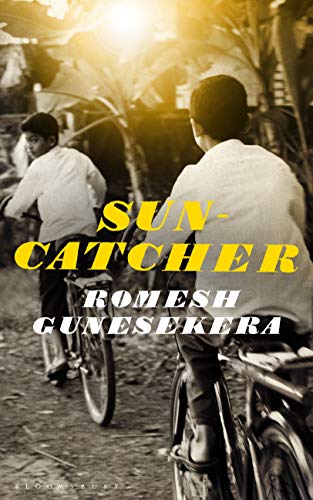 Suncatcher: Shortlisted for the Jhalak Prize 2020 by Romesh Gunesekera

SHORTLISTED FOR THE 2020 JHALAK PRIZE 1964. Ceylon is on the brink of change. But Kairo is at a loose end. School is closed, the government is in disarray, the press is under threat and the religious right are flexing their muscles. Kairo's hard-working mother blows off steam at her cha-cha-cha classes; his Trotskyite father grumbles over the state of the nation between his secret flutters on horseraces in faraway England. All Kairo wants to do is hide in his room and flick over second-hand westerns and superhero comics, or escape on his bicycle and daydream. Then he meets the magnetic teenage Jay, and his whole world is turned inside out. A budding naturalist and a born rebel, Jay keeps fish and traps birds for an aviary he is building in the garden of his grand home. The adults in Jay's life have no say in what he does or where he goes: he holds his beautiful, fragile mother in contempt, and his wealthy father seems fuelled by anger. But his Uncle Elvin, suave and worldly, is his encourager. As Jay guides him from the realm of make believe into one of hunting-guns and fast cars and introduces him to a girl - Niromi - Kairo begins to understand the price of privilege and embarks on a journey of devastating consequence. Taut and luminous, graceful and wild, Suncatcher is a poignant coming-of-age novel about difficult friendships and sudden awakenings. Mesmerizingly it charts the loss of innocence and our recurring search for love - or consolation - bringing these extraordinary lives into our own.

Wonderful ... A poignant coming-of-age novel * Mail on Sunday *
Intoxicating ... A lyrical and soulful voice -- Barney Norris * Guardian *
Suncatcher is a dreamy, mesmerising story on the displeasures of growing up, as Jay and Kairo both long to reach a state of being that captures both the uncorrupted nature of childhood and the cool maturity of adulthood. It may be rare to find that mix in real life, but it is in full abundance in Gunesekera's novel -- Rebecca Liu * Prospect *
Vivid ... A period piece suffused with foreboding ... Gunesekera captures the first rumblings of the cataclysm that would ruinously engulf his nation and that has always compulsively engaged him * Sunday Times *
A dreamy, mesmerising story on the displeasures of growing up * Prospect *
Beautifully captures the excitement and confusion of teenage friendship ... A magical evocation of a world where it seems that everything should remain as it is, while you know, sadly, that it can't and won't -- Allan Massie * Scotsman *
Sumptuous * Spectator *
Brilliant ... A wise and poignant portrait of a country caught in the moment before it loses its innocence * Financial Times *
Brilliant ... Pervaded by a sense of threatened beauty: the flash of fish, the flight of birds, the slant of sun on trees, a yearning for innocence * Times Literary Supplement *
Gunesekera artfully renders the unequal relationship between the two boys, and the fractures within their families * New York Times *
A dreamy, mesmerising story on the displeasures of growing up * Prospect *
A joyous narrative of relationships across the fence ... but even when it tugs at the heartstrings, Gunesekera's elegaic prose has a curiously healing quality * The Hindu *
A book ... that will keep you awake at night thinking, reliving its experiences, and actually re-examining your own * Deccan Herald *
For sheer pleasure and good writing, little matched Suncatcher, Romesh Gunesekera's recovery of lost time and an intense teenage friendship in Sri Lanka when it was still Ceylon in the early years of Independence * Scotsman, Books of the Year *
A haunting and poetic foray into a newly independent Sri Lanka and its social fissures * Dawn *
Gunesekera's prose is lush yet luminously clear, and Kairo - as he deciphers the world around him and his place in that world - is the perfect guide to the book's turbulent setting * Boston Globe *
Gunesekera's gift is to foreground a story of adolescent love and rivalry against the brewing discontent of a society * Mint *
A delightful book, beautifully written ... Romesh Gunesekera beautifully captures Kairo's imaginative responses to life * Newtown Review of Books *

Romesh Gunesekera is the author of many acclaimed works of fiction including Reef, which was shortlisted for the Booker Prize, The Sandglass, winner of the inaugural BBC Asia Award, and The Match, the ground-breaking cricket novel. His debut collection of stories, Monk?sh Moon, was a New York Times Notable Book. His last book Noontide Toll captured a vital moment in post-war Sri Lanka. His fiction has been translated into over a dozen languages and he is the recipient of many awards including a Premio Mondello in Italy. He was born in Colombo and lives in London. He is a Fellow of the Royal Society of Literature. www.romeshgunesekera.com

GOR010385965
Suncatcher: Shortlisted for the Jhalak Prize 2020 by Romesh Gunesekera
Romesh Gunesekera
Used - Very Good
Hardback
Bloomsbury Publishing PLC
2019-11-28
336
1526610418
9781526610416
N/A
Book picture is for illustrative purposes only, actual binding, cover or edition may vary.
This is a used book - there is no escaping the fact it has been read by someone else and it will show signs of wear and previous use. Overall we expect it to be in very good condition, but if you are not entirely satisfied please get in touch with us.