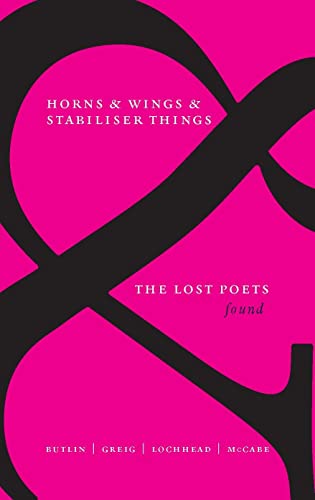 In the seventies and eighties, The Lost Poets - Ron Butlin, Andrew Greig, Liz Lochhead and Brian McCabe, with musician James Hutcheson - were Scotland's reply to the Liverpool Poets. For many years they were regulars on the Edinburgh Fringe and elsewhere. With their unique blend of poetry and music they proved to be an inspiration for much of today's spoken-word movement. Each of them went on to highly successful careers as novelists, playwrights and visual artists, as well as continuing to publish poetry.

Ron Butlin is an award-winning poet, playwright, novelist, short story writer chidlren's au-thor and librettist whose works have been translated into many languages. He regularly gives creative writing workshops in schools, and was Edinburgh Makar from 2008 to 2014.

Andrew Greig is a Scottish writer living in Edinburgh and Orkney. He has written seven novels, a variety of non-fiction books, and nine volumes of poetry, including Found At Sea, Getting Higher: Complete Mountain Poems and This Life, This Life: New and Selected Poems. His collection The Order of the Day was a Poetry Book Society choice.

Brian McCabe is a writer, tutor and editor, best known for his short stories and poetry. He grew up in Bonnyrigg, Edinburgh.

Liz Lochhead was born in Motherwell in 1947. While studying Drawing and Painting at the Glasgow School of Art she began to write seriously, gradually losing her way with her initial dream of becoming a painter. Her first book of poetry, Memo for Spring, was published in 1972 and sold 5,000 copies. The Scottish-Canadian Writers Exchange Fellowship,1978-9, marked her transition to full-time writer. She has since published many plays and poetry collections including A Choosing and Fugitive Colours, and is proud to be Honorary President of the Scottish Poetry Library.

GOR010767230
9781846975554
1846975557
Horns & Wings & Stabiliser Things: The Lost Poets by Ron Butlin
Ron Butlin
Used - Very Good
Paperback
Birlinn General
2020-02-06
64
N/A
Book picture is for illustrative purposes only, actual binding, cover or edition may vary.
This is a used book - there is no escaping the fact it has been read by someone else and it will show signs of wear and previous use. Overall we expect it to be in very good condition, but if you are not entirely satisfied please get in touch with us
Trustpilot