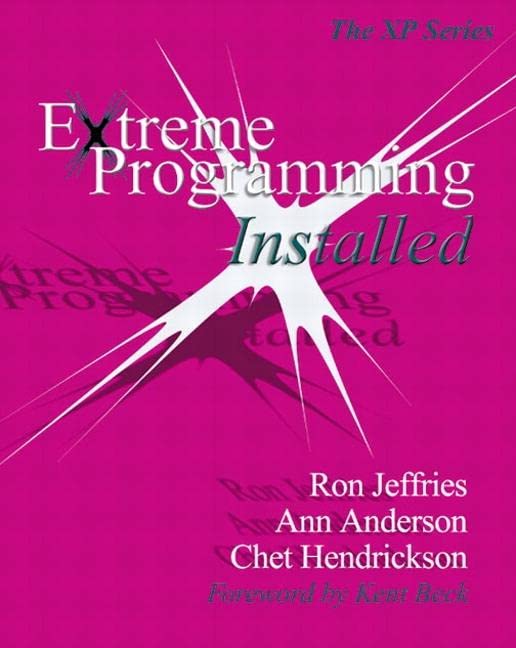 Extreme Programming Installed explains the core principles of Extreme Programming and details each step in the XP development cycle. This book conveys the essence of the XP approach--techniques for implementation, obstacles likely to be encountered, and experience-based advice for successful execution.

Extreme Programming (XP) is a revolutionary lightweight methodology that's supercharging software development in organizations worldwide. Perfect for small teams producing software with fast-changing requirements, XP can save time and money while dramatically improving quality. In XP Installed, three participants in DaimlerChrysler's breakthrough XP project cover every key practice associated with XP implementation. The book consists of a connected collection of essays, presented in the order the practices would actually be implemented during a project. Ideal as both a start-to-finish tutorial and quick reference, the book demonstrates exactly how XP can promote better communication, quality, control, and predictability. An excellent complement to the best selling Extreme Programming Explained, it also works perfectly on a standalone basis, for any developer or team that wants to get rolling with XP fast.

Ron Jeffries was the on-site XP coach for the original Extreme Programming project, a large financial system for a major automotive manufacturer. An independent consultant who has been involved in eXtreme Programming for over more than four years, he has presented numerous talks and published several papers on the topic. Ron has been a systems developer for more years than most of you have been alive, and his teams have built operating systems, compilers, relational database systems, and a wide range of applications. He has not, as yet, run out of new ways to make mistakes (and resolve them). Ron has recently joined forces with Object Mentor, Inc., to help more people improve their software process.

Ann Anderson is an independent consultant engaged full time in coaching XP and in teaching and using Smalltalk for financial applications development. Ann was a team member on the large payroll system that was the original proving ground for Extreme Programming. Throughout her career she has been involved in object-oriented projects spanning control systems, insurance, tax, and finance.

Chet Hendrickson is a systems architect at ThoughtWorks, Inc, where he makes sure that programmers and customers know and understand their rights. Previously, Chet was a senior software systems specialist at a major automobile manufacturer, where he worked on a large operational finance system that was the test bed for Extreme Programming. He was the winner of the Project Manager Game at OOPSLA'99 (although he thinks it might have been rigged).


25. How to Estimate Anything.


34. Everything That Could Possibly Break.

GOR004266714
Extreme Programming Installed by Ron Jeffries
Ron Jeffries
Used - Well Read
Paperback
Pearson Education (US)
2000-10-16
288
0201708426
9780201708424
N/A
Book picture is for illustrative purposes only, actual binding, cover or edition may vary.
This is a used book - there is no escaping the fact it has been read by someone else and it will show signs of wear and previous use. Overall we expect it to be in very good condition, but if you are not entirely satisfied please get in touch with us.