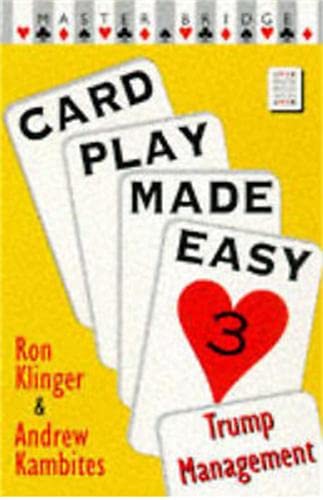 Out of Stock
$30.99
inc. GST
Each chapter covers a different area of trump play and illustrates the required skill with plentiful examples
Good
Only 0 left

Most of the contracts that you play are suit contracts. The presence of a trump suit provides more choices and also more dangers.

This third book in the Card Play Made Easy series deals solely with trump contracts - and aims to impart skills that are not too difficult to recognise and to put into practice. The topics include how to create more winners and how to eliminate losers, how to spot the defenders' plans and how to thwart them and how to choose the best line when you have a number of options.

Chapters 1-7 end with a collection of declarer problems on the relevant area and the recommended line of play for each. After the final chapter there is a lengthy quiz on all aspects of the book, plus the solutions.

After studying the advice and deals in these pages, you are bound to become a more successful declarer.

Ron Klinger is a leading international bridge teacher and has represented Australia in over 20 world championships since 1976. An Australian Grand Master and a World Bridge Federation International Master, he has written over 60 books, some of which have been translated into Bulgarian, Chinese, Danish, French, Hebrew and Icelandic. Two of his titles - Guide to Better Card Play and Right Through the Pack Again - won Book of the Year awards. He has created many new bridge ideas and devised a number of conventions. He lives in NSW, Australia, and has written a daily bridge column in The Sydney Morning Herald and The Sun-Herald for over 15 years.

Andrew Kambites is a bridge grand master, a leading bridge teacher and author and lives in Stroud, Gloucestershire. He has written over 20 bridge books, some as sole author and others in partnership with Ron Klinger and Hugh Kelsey. Andrew has written bridge articles for the EBU magazine, English Bridge , for 25 years. Andrew has been directing and running seminars for First for Bridge since retiring as a maths teacher in 1997.

GOR001705172
Card Play Made Easy 3 by Ron Klinger
Ron Klinger
Used - Good
Paperback
Orion Publishing Co
1998-09-03
120
0575065966
9780575065963
N/A
Book picture is for illustrative purposes only, actual binding, cover or edition may vary.
This is a used book - there is no escaping the fact it has been read by someone else and it will show signs of wear and previous use. Overall we expect it to be in very good condition, but if you are not entirely satisfied please get in touch with us.