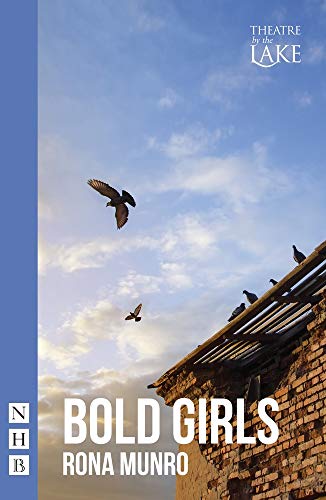 Used Price
$22.49
inc. GST
Free Shipping in Australia
1991 West Belfast. A celebration of women's strength under siege. Sharply funny, moving, yet never shying from the harsh realities of life during the Troubles, the award-winning Bold Girls announced Rona Munro as one of the best playwrights of her generation.
Reviews:
Trustpilot
Good

It's 1991 in West Belfast. With their husbands either locked up or killed, Marie, Cassie and Nora are just trying to get on with their lives, despite the bombs, burning buses and soldiers trampling the flower beds. Life must go on - after all, there's still laundry to do and kids to feed. But when a mysterious young woman turns up on Marie's doorstep and disrupts their girls' night out, the devastating revelations which ensue will shatter dreams and threaten their friendship irrevocably. Sharply funny, moving, yet never shying from the harsh realities of life during the Troubles, the award-winning Bold Girls announced Rona Munro as one of the best playwrights of her generation. This celebration of women's strength under siege was first seen in 1990, and this new edition was published alongside the revival at Theatre by the Lake, Keswick, in June 2018.

Other credits include Scuttlers for Manchester's Royal Exchange, The Last Witch for the Traverse Theatre and the Edinburgh International Festival, Long Time Dead for Paines Plough and the Drum Theatre Plymouth, The Indian Boy and Little Eagles for the Royal Shakespeare Company and Pandas for the Traverse in Edinburgh. She is the co-founder, with actress Fiona Knowles, of Scotland's oldest continuously performing, small-scale touring theatre company, The Msfits. Their one-woman shows have toured every year since 1986.

Film and television work includes the Ken Loach film Ladybird Ladybird, Aimee and Jaguarand television dramas Rehab (directed by Antonia Bird) and BAFTA-nominated Bumping the Odds for the BBC. She has also written many other single plays for television and contributed to series including Casualty and Dr Who. Most recently, she wrote the screenplay for Oranges and Sunshine, directed by Jim Loach and starring Emily Watson and Hugo Weaving.

She has contributed several radio plays to the Stanley Baxter Playhouse series on BBC Radio 4.