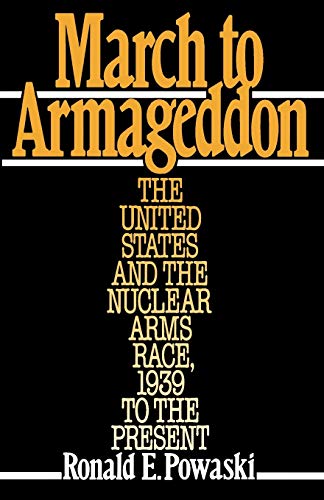 This timely and accessible book traces the evolution of the nuclear arms race from its origin in Roosevelt's decision to develop an atomic bomb to Reagan's decision to continue its expansion in the 1980s. As Powaski explains, the United States and the Soviet Union have a combined total of almost 50,000 nuclear weapons. Nuclear arms treaties and agreements are threatening to collapse, he argues, while the proliferation of nuclear materials and weapons throughout the world has given many countries the capability to produce nuclear weapons. Powaski shows how one President after another has promised to do his utmost to end the nuclear weapons competition, yet each one has actually increased the quantity of these weapons in the American arsenal, revealing a startling discrepancy between Presidential words and actions.

'This is a solid, readable, but not intimidating introduction to the great question of our time.' Booklist
'This is an excellent synthesis ... concise, well-organized narrative ... Powaski clearly elucidates this complex and all-important subject.' Publishers Weekly
'... accessible and scholarly history ... This comprehensive survey will be a basic resource for would-be arms controllers and disarmament activists. It's on my desk next to the dictionary.' Nuclear Times 'a concise and grim narrative of American policies and the spread of nuclear weaponry' Richmond Times Dispatch
'an orderly, well written, thorough review of the decision-making process for US military policy and arms control.' Choice