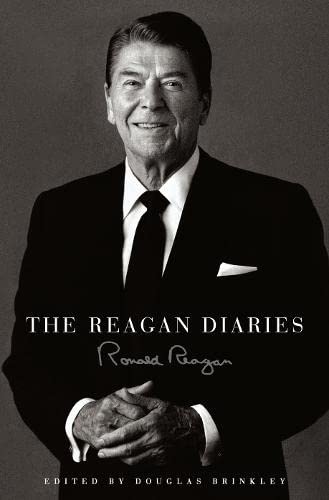 The Reagan Diaries
by Ronald Reagan

Historic and deeply revealing, these are the personal diaries kept by Ronald Reagan during his time in the White House (1981-89).

The Reagan Diaries by Ronald Reagan

Historic and deeply revealing, these are the personal diaries kept by Ronald Reagan during his time in the White House (1981-89).

During his eight years as the 40th President of the United States, Ronald Reagan kept a daily diary, in which he recorded his innermost thoughts and observations. The handwritten diaries have been seen by only a few people to date, and they share Reagan's personal insights into the extraordinary, the historic, and the routine day-to-day events of his Presidency. `When we left Sacramento, we felt the time passed so quickly, we could hardly remember the eight years,' said Nancy Reagan. `When Ronnie became president, he wanted to write it all down so we could remember these special times.'

From his first inauguration to weekends at Camp David to the end of the Cold War, these Presidential diaries are the most detailed in American history, filled with Reagan's trademark wit, sharp intelligence, and humour. They offer the deep warmth of his voice, while shedding new light on the character of a true American leader. To read these diaries is to gain a unique understanding of the Oval Office and one of the greatest presidents in American history.

Reagan describes meetings with heads of state and international statesmen (including the Queen, Pope John Paul II, Mikhail Gorbachev, Margaret Thatcher and Fidel Castro). His geniality shines through, while his marriage to Nancy and his strong relationship with God emerge clearly as the cornerstones of his life.

'Amusing and enlightening...I quite simply couldn't put them down.' Sunday Times

'What emerges from these pages is the remarkable character of Ronald Reagan himself. He was what he seemed to be, so fundamentally decent and sunny that it is hard to figure how the American political system could have produced such a genial leader.' Sunday Telegraph

'Reagan's handwritten summary of almost every day of his 1981-89 presidency shows more clearly than ever before the way his mind worked...On the whole, it worked pretty well - especially in his cold-war policy.' The Economist

Ronald Reagan was born in 1911 in Illinois. After a career as a TV and film star, he was twice elected the governor of California before becoming the 40th president of the United States. He died in June 2004.

GOR003027007
The Reagan Diaries by Ronald Reagan
Ronald Reagan
Used - Good
Hardback
HarperCollins Publishers
2007-06-18
784
0007263058
9780007263059
Short-listed for APA The Audies: Achievement in Abridgement 2007
Book picture is for illustrative purposes only, actual binding, cover or edition may vary.
This is a used book - there is no escaping the fact it has been read by someone else and it will show signs of wear and previous use. Overall we expect it to be in very good condition, but if you are not entirely satisfied please get in touch with us.