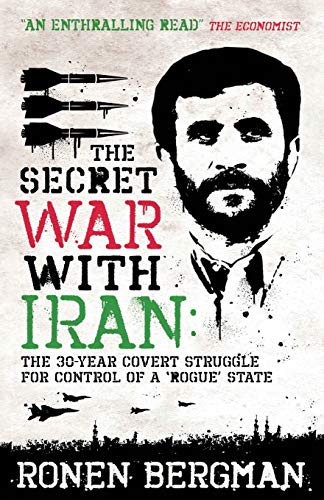 The Secret War with Iran
by Ronen Bergman

Used Price
$18.49
inc. GST
Free Shipping in Australia
With nuclear aspirations, an Islamic theocracy, oil riches, and a leadership given to inflammatory rhetoric, Iran is the bogeyman of global politics. This book presents an account of a vast conflict being fought under the public's radar. It provides insight into the power struggle at the heart of the Middle East.
Reviews:
Trustpilot
Very Good

The Secret War with Iran Summary

The Secret War with Iran: The 30-year Covert Struggle for Control of a Rogue State by Ronen Bergman

While many now fear a looming war with Iran, few know that this war is already raging and has been doing so for the past three decades.

Starting from the aftermath of the Iranian revolution, intelligence expert Ronen Bergman details the complex array of political manoeuvring, assassination attempts, arms trading, and suicide bombs that have characterised the secret war between Iran and the intelligence services of Israel and the United States. Drawing on interviews with a plethora of intelligence agents from all sides, this is a riveting exploration of the growing influence of Iran in the Middle East, and the covert activities of the CIA and Mossad to tackle Iran and its political ambitions.

The Secret War with Iran Reviews

"An enthralling read" * The Economist *
"Thoroughly researched and persuasively argued." * Publishers Weekly *
"Ronen Bergman has managed to pull off that much-vaunted trick, beloved of blurb-writers, of making a serious ivestigative boook read like a thriller." * Jewish Chronicle *

GOR003148176
The Secret War with Iran: The 30-year Covert Struggle for Control of a Rogue State by Ronen Bergman
Ronen Bergman
Used - Very Good
Paperback
Oneworld Publications
2009-04-16
432
1851686762
9781851686766
N/A
Book picture is for illustrative purposes only, actual binding, cover or edition may vary.
This is a used book - there is no escaping the fact it has been read by someone else and it will show signs of wear and previous use. Overall we expect it to be in very good condition, but if you are not entirely satisfied please get in touch with us.