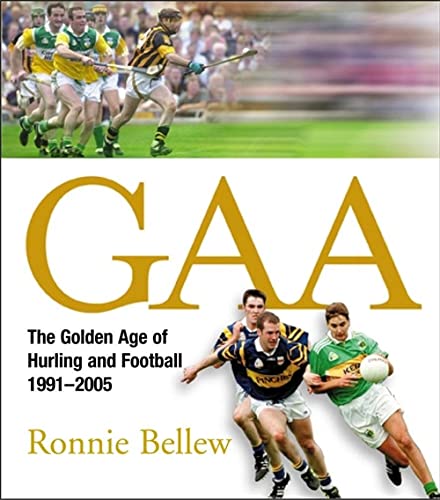 GAA The Glory Years: Hurling and Football 1990-2005 by Ronnie Bellew

During the past fifteen years, the GAA has gone through a renaissance. Despite the rising popularity of other sports, it has revolutionised itself to take its place centre stage in the Irish sporting arena, enjoying a greater groundswell of support than ever before.

The developments have been astounding. The emergence of Ulster football and the revival in the West. In hurling, the men from Clare and Wexford and the domination of D.J. Carey. The amazing development of Croke Park and the rise in supporters' fanaticism. 'Jayo-mania' in 1995 heralding the era of the GAA superstar. The strikes and revolts of the Cork and Offaly hurlers and the emergence of player power.

In GAA: The Glory Years, Ronnie Bellew tells the story of these remarkable fifteen years - of the events, on and off the field, the breakthroughs, the controversies and the personalities behind a golden era that has seen the GAA reinvent itself to become the hottest ticket in town.

This is the story of how the GAA got from there to here.

'...this is a beautifully presented volume' * Capital *
'Lavishly illustrated GAA book...from gifted GAlway writer who tells the racy stories of the 1990s with a literary craftsmanship that is rare in sportswriting.' * Daily Ireland *
'Delivers lavishly on its target subject with intelligent text and striking pictures.' * Irish Times Sport *
'Packed with stunning photographs and a wealth of facts and figures, this book captures the full story of the past 15 years.' * Sunday Independent Sport *

Ronnie Bellew is a freelance journalist and is currently sports feature writer for the Sunday Independent. He has worked on a variety of GAA and Sports publications as well as Ireland on Sunday, the Irish Independent, The Irish Times and the Irish Post.

GOR001902226
GAA The Glory Years: Hurling and Football 1990-2005 by Ronnie Bellew
Ronnie Bellew
Used - Very Good
Hardback
Hachette Books Ireland
2005-11-20
0340837608
9780340837603
N/A
Book picture is for illustrative purposes only, actual binding, cover or edition may vary.
This is a used book - there is no escaping the fact it has been read by someone else and it will show signs of wear and previous use. Overall we expect it to be in very good condition, but if you are not entirely satisfied please get in touch with us.