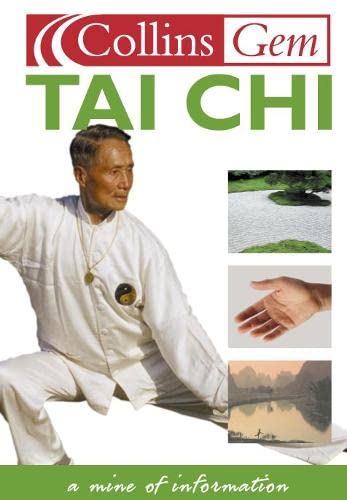 Tai Chi Chuan began as a martial art in China over 1000 years ago and is now widely recognized for its great health benefits. This Collins Gem provides a simple, clear and highly illustrated introduction.

Tai Chi Chuan began as a martial art in China over 1000 years ago and is now widely recognized for its great health benefits. This Collins Gem provides a simple, clear and highly illustrated introduction.

This book provides an introduction to the history, philosophy and practice of this fascinating, multi-faceted art. From its early origins in the holy Taoist Mountains of China it has now become a highly practical tool for life in the 21st century. Tai Chi can help to improve posture, increase energy levels and create a calm, clear mind. By learning a few simple postures, and regularly practicising them for a few minutes each day, you can gradually come to integrate this ancient Chinese system into your daily routine and enjoy its benefit in many ways: physically, mentally, emotionally and, ultimately, spiritually.

Included are a number of postures from the first section of the Short Yang form that will take only three minutes to complete. They will provide a little taste of what Tai Chi Chuan can offer. Study each posture carefully and the advice given on transitions and purpose. Let yourself gradually become familiar with one or two movements and you can then progress to learning the complete sequence. Once learned, you can practise the routine three or four times a session and gain benefits that are close to those you would achieve through performing an entire form of Tai Chi Chuan.

GOR000837319
9780007110131
0007110138
Tai Chi (Collins Gem) by Ronnie Robinson
Ronnie Robinson
Collins Gem
Used - Very Good
Paperback
HarperCollins Publishers
2001-05-01
192
N/A
Book picture is for illustrative purposes only, actual binding, cover or edition may vary.
This is a used book - there is no escaping the fact it has been read by someone else and it will show signs of wear and previous use. Overall we expect it to be in very good condition, but if you are not entirely satisfied please get in touch with us
Trustpilot