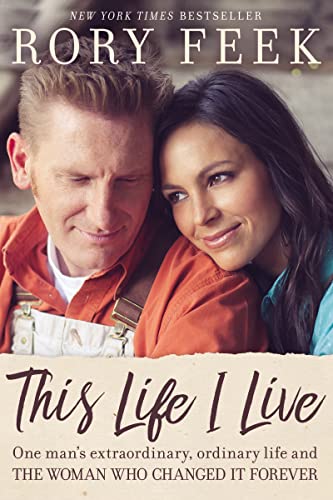 This Life I Live
by Rory Feek

Used Price
$34.99
inc. GST
Free Shipping in Australia
The Love Story that Captured a Nation's Heart The story she said he was born to write.
Reviews:
Trustpilot
Very Good

This Life I Live Summary

This Life I Live: One Man's Extraordinary, Ordinary Life and the Woman Who Changed It Forever by Rory Feek

Her story. His story. The love story of Joey and Rory.

By inviting so many into the final months of Joey's life as she battled cancer, Joey and Rory Feek captured hearts around the world with how they handled the diagnosis; the inspiring, simple way they chose to live; and how they loved each other every step of the way. But there is far more to the story.

"My life is very ordinary," says Rory. "On the surface, it is not very special. If you looked at it, day to day, it wouldn't seem like much. But when you look at it in a bigger context-as part of a larger story-you start to see the magic that is on the pages of the book that is my life. And the more you look, the more you see. Or, at least, I do."

In this vulnerable book, he takes us for the first time into his own challenging life story and what it was like growing up in rural America with little money and even less family stability.

In This Life I Live, Rory Feek helps us not only to connect more fully to his and Joey's story but also to our own journeys. He shows what can happen when we are fully open in life's key moments, whether when meeting our life companion or tackling an unexpected tragedy. He also gives never-before-revealed details on their life together and what he calls "the long goodbye," the blessing of being able to know that life is going to end and taking advantage of it. Rory shows how we are all actually there already and how we can learn to live that way every day.

A gifted man from nowhere and everywhere in search of something to believe in. A young woman from the Midwest with an angelic voice and deep roots that just needed a place to be planted. This is their story. Two hearts that found each other and touched millions of other hearts along the way.

Customer Reviews - This Life I Live

Rory Feek is a true renaissance man, known as one of Nashville's premiere songwriters, entrepreneurs, and out-of-the-box thinkers. He is a world-class storyteller, crossing all creative mediums, from music and film to books and digital media, and is the New York Times bestselling author of This Life I Live and author of Once Upon a Farm and The Cow Said Neigh. As a blogger, Rory shares his heart and story with the world through roryfeek.com and has more than 2 million Facebook followers. As a songwriter, Rory has written multiple number-one songs. As an artist, he is half of the Grammy-winning country music duo Joey+Rory. As a filmmaker, Rory wrote and filmed the touching documentary To Joey, with Love and directed the feature-length love story Finding Josephine. Rory has appeared on The Rachael Ray Show, CBS Sunday Morning, and The Today Show. As a storyteller, Rory has a new role as Chief Creative Officer of the television network RFD-TV, where he will continue to share not only his own story with the world but also the incredible stories of many others. RFD-TV originally aired the television variety show The Joey+Rory Show and will also air Rory's most recent television series, This Life I Live. Rory and his youngest daughter, Indiana, live an hour south of Nashville in an 1870s farmhouse, where she goes to school in a one-room schoolhouse built for their community.

GOR009861389
This Life I Live: One Man's Extraordinary, Ordinary Life and the Woman Who Changed It Forever by Rory Feek
Rory Feek
Used - Very Good
Paperback
Thomas Nelson Publishers
2018-02-06
272
0785216820
9780785216827
N/A
Book picture is for illustrative purposes only, actual binding, cover or edition may vary.
This is a used book - there is no escaping the fact it has been read by someone else and it will show signs of wear and previous use. Overall we expect it to be in very good condition, but if you are not entirely satisfied please get in touch with us.