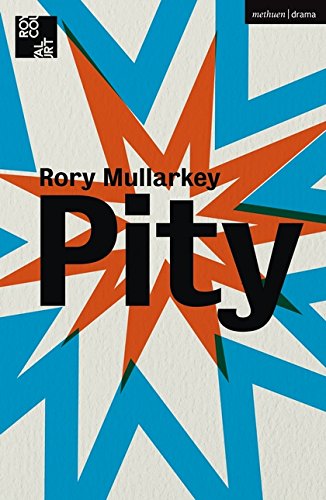 Two bombs in one day is a foul coincidence Don't forget the lightning strike A normal day. A person stands in the market square watching the world go by. What happens next verges on the ridiculous. There's ice cream. Sunshine. Shops. Some dogs. A wedding. Bombs. Candles. Blood. Lightning. Sandwiches. Snipers. Looting. Gunshots. Babies. Actors. Azaleas. Famine. Fountains. Statues. Atrocities. And tanks. (Probably). Rory Mullarkey's new play asks whether things really are getting worse. And if we care.

Rory Mullarkey's poetical, darkly funny but never murky adaptation proves stimulating and surprising . . . makes you laugh one moment and shudder the next * The Times (on Saint George and the Dragon) *
It's no surprise that there's a lot of theatre right now preoccupied with tyranny and freedom, as well as the power of nationalism to divide a country rather than hold it together. Rory Mullarkey's new play addresses all these issues, favouring an anarchic style that at times brings to mind Blackadder and Monty Python...There are ticklish jokes and moments of enjoyable mischief... * Evening Standard (on Saint George and the Dragon) *

Stockport native Rory Mullarkey graduated in 2009 from Cambridge, after which he studied at the State Theatrical Arts Academy of St. Petersburg. A translator of Russian Drama, Mullarkey's translations have been produced by the ADC Theatre, The Royal Court and the Free Theatre of Belarus. Plays include Single Sex (Royal Exchange); Remembrance Day (Royal Court), Tourism (Headlong) and Come To Where I'm From (Paines Plough). Mullarkey spent 2010 as Writer-on-Attachment at the Royal Court Theatre, London, and 2011 as the Pearson Writer in Residence at the Royal Exchange, Manchester. His The Grandfathers was programmed as part of the National Theatre's 2012 Connections: Plays for Young People. In 2014, Rory Mullarkey won the Harold Pinter Playwriting Prize, the George Devine Award (jointly with Alice Birch) and the James Tait Black Prize for Drama for his play Cannibals, published by Methuen Drama.

GOR009316122
Pity by Rory Mullarkey
Rory Mullarkey
Modern Plays
Used - Very Good
Paperback
Bloomsbury Publishing PLC
2018-07-12
72
1350093890
9781350093898
N/A
Book picture is for illustrative purposes only, actual binding, cover or edition may vary.
This is a used book - there is no escaping the fact it has been read by someone else and it will show signs of wear and previous use. Overall we expect it to be in very good condition, but if you are not entirely satisfied please get in touch with us.