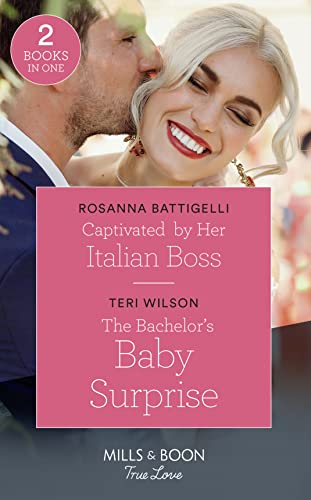 Captivated By Her Italian Boss
by Rosanna Battigelli

Captivated by Her Italian Boss by Rosanna Battigelli

Captivated By Her Italian Boss Summary

Captivated by Her Italian Boss by Rosanna Battigelli

The boy she tried to forget is now the boss her heart won't let go...

Neve Wilder's past comes flooding back when she meets her boss, Davide Cortese. Can he really be that boy who stole her heart and then disappeared? The intense chemistry between them hasn't changed! But can she allow herself to be captivated by her gorgeous Italian again?

Evangeline is determined to focus on the future.

Evangeline knows she needs to put a bad breakup behind her. And stop obsessing over her subsequent super-hot one night stand - even if he is Ryan Wilde, her new boss! But that might not be so easy when she discovers she's pregnant. And that telling Ryan would mean risking everything!

Teri Wilson is the author/creator of the Hallmark Channel Original movies Unleashing Mr. Darcy, Marrying Mr. Darcy and The Art of Us, as well as a fourth film currently in development. Teri is also a double finalist in the prestigious 2018 RWA RITA Awards for her novels THE PRINCESS PROBLEM and ROYALLY WED. She has a major weakness for cute animals, pretty dresses, Audrey Hepburn movies and good books. Visit her at www.teriwilson.net or on Twitter @TeriWilsonauthr.

GOR009275533
Captivated By Her Italian Boss: Captivated by Her Italian Boss / The Bachelor's Baby Surprise (Wilde Hearts) (Mills & Boon True Love) by Rosanna Battigelli
Rosanna Battigelli
Used - Very Good
Paperback
HarperCollins Publishers
2018-07-26
400
0263265196
9780263265194
N/A
Book picture is for illustrative purposes only, actual binding, cover or edition may vary.
This is a used book - there is no escaping the fact it has been read by someone else and it will show signs of wear and previous use. Overall we expect it to be in very good condition, but if you are not entirely satisfied please get in touch with us.