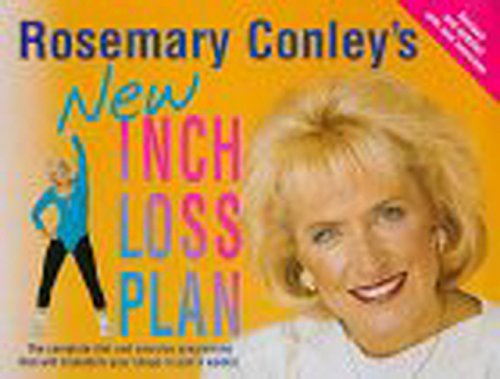 In Stock
$17.49
inc. GST
ROSEMARY CONLEY'S NEW INCH LOSS PLAN is a completely revised and updated diet and progressive excersise programme that conforms to the latest medical and fitness guidelines and is designed to maximise inch loss from all your problem areas.
Very Good
Only 3 left

YOU WON'T BELIEVE HOW EASY IT IS TO TRANSFORM YOUR SHAPE IN JUST 4 WEEKS. MODIFY YOUR LIFESTYLE-AND STAY SLIM FOREVER! ROSEMARY CONLEY'S NEW INCH LOSS PLAN is a completely revised and updated diet and progressive excersise programme that conforms to the latest medical and fitness guidelines and is designed to maximise inch loss from all your problem areas. It includes new diet menus, excersise routines and a fat table listing food to avoid. With positive goals to reach each day and a weight and inch loss record chart to check your success, the NEW INCH LOSS PLAN is easy to follow and to fit into any lifestyle. You can re-shape your figure in just one month. After 28 days, you'll see spectacular results - and you'll feel much healthier too. ROSEMARY CONLEY'S NEW INCH LOSS PLAN Simply the safest. . . . Simply the most effective. . . . SIMPLY THE BEST!

Rosemary has lived in Leicestershire all her life and left school at just 15. After training as a secretary and working as a Tupperware dealer she started her own Slimming and Good Grooming business in 1971 with an investment of just GBP8, and ran classes across the city and county. Ten years later she sold the classes to IPC Magazines for GBP52,000, but continued to run them until 1985, when she went freelance again.

In 1988 she wrote her internationally bestselling book The Hip & Thigh Diet, which took her all over the world. Since then she has written 37 diet and fitness books, presented 31 fitness videos/DVDs with combined sales of 9 million, has had her own TV shows on BBC and ITV, published her own magazine for 16 years and has run franchised diet and fitness clubs for 21 years.

With the advancements in technology and in the market itself, Rosemary now chairs one of the UK's leading online weight-loss clubs, rosemaryconley.com.

In 2004 Rosemary was awarded a CBE in the Queen's New Year Honours for 'services to the fitness and diet industries'. In 2012, at age 65, Rosemary took part in ITV1's Dancing on Ice and holds the title for being the oldest contestant in the history of the show to progress the furthest in the competition!.

GOR000509115
Rosemary Conley's New Inch Loss Plan by Rosemary Conley
Rosemary Conley
Used - Very Good
Paperback
Cornerstone
1998-05-07
208
0099271028
9780099271024
N/A
Book picture is for illustrative purposes only, actual binding, cover or edition may vary.
This is a used book - there is no escaping the fact it has been read by someone else and it will show signs of wear and previous use. Overall we expect it to be in very good condition, but if you are not entirely satisfied please get in touch with us.