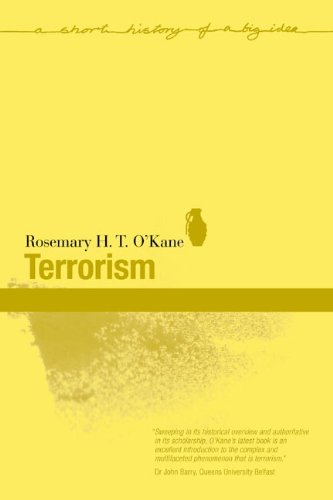 In Stock
$22.99
inc. GST
What different forms does terrorism take and what do they have in common? Spanning 2000 years and 3 continents, this book explores terrorism in all its forms. It concludes that no matter the form, however, the method remains essentially the same - a system of summary justice: in its essence, a deliberate targeting of innocents as victims.
Very Good
Only 3 left

What different forms does terrorism take and what do they have in common?

Explosives carried in the rucksack. A bomb under a park bench. A hi-jacked aeroplane. Today these images of terrorism are broadcast into our homes. Terrorism itself embodies far more than this, however. Those who create terror are not just organizations such as al Qaieda and ETA but also states and repressive governing regimes.

Case studies are included and explanations are explored for each of these many terrorisms. No matter the form, however, the method remains essentially the same - a system of summary justice: in its essence the deliberate targeting of innocents as victims.


Why buy from World of Books

"Sweeping in its historical overview and authoritative in its scholarship, O'Kane's latest book is an excellent introduction to the complex and multifaceted phenomenon that is terrorism. Written in an engaging and student-friendly style, this will be a core text book for students in the areas of terrorism studies and conflict this book is a concise, authoritative and invaluable introduction and guide."

Dr Rosemary O'Kane is Professor of Politics at KeeleUniversity. She is the author of Terror, Force and States (1996) and The Likelihood of Coups (1987).

1. Terrorism Past and Present

2. The Concept and Definition of Terrorism

3.Organization and Purpose of Terror Regimes

9. The Future of Terrorism

GOR004539380
Terrorism by Rosemary H. T. O'Kane
Rosemary H. T. O'Kane
Short Histories of Big Ideas
Used - Very Good
Paperback
Pearson Education Limited
2007-04-26
232
0582506107
9780582506107
N/A
Book picture is for illustrative purposes only, actual binding, cover or edition may vary.
This is a used book - there is no escaping the fact it has been read by someone else and it will show signs of wear and previous use. Overall we expect it to be in very good condition, but if you are not entirely satisfied please get in touch with us.