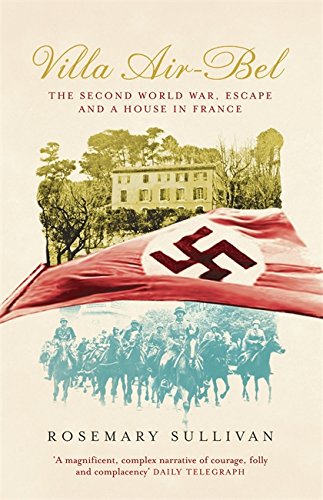 The remarkable true story of some of Europe's greatest artists, the house that sheltered them during the Second World War, and the Emergency Rescue Committee who helped them escape from the Nazis

The Franco-German armistice, signed in June 1940 following the German invasion of France, called on the Vichy government to surrender on demand all refugees considered enemies of the Third Reich. Suddenly, thousands of artists, scientists and other intellectuals feared for their lives. The Emergency Rescue Committee, based in New York, compiled a list of two hundred people it considered the most endangered, including artists and writers Andre Breton, Max Ernst and Benjamin Peret. The committee sent Varian Fry to set up its headquarters in Marseilles, with the aim of helping these artists to escape. A number of them were sheltered at the Villa Air-Bel.

Amidst the chaos and terror of wartime France, the villa became an oasis of calm, and a centre of creativity. Rosemary Sullivan explores the diaries, memoirs and letters of the individuals involved as she uncovers their private worlds and the web of relationships they developed. Central to her task is to understand what it must feel like to move from freedom to occupation: to feel threatened, administered, restrained. Villa Air-Bel brilliantly dramatizes the slow, relentless process by which ordinary lives were turned into lives lived in terror. In the end every artist in the house, as well as two thousand others, found asylum outside of France through the courageous intervention of Fry and his committee.

'Rosemary Sullivan knows that you can understand nothing about a place without listening to individual people and their stories' * Margaret Atwood *
'Rosemary Sullivan's Villa Air-Bel is a marvellous addition to the surging literature on occupied France. Sullivan writes . . . as a dramatist. Her scene-by-scene evocation of life at the house reads like an updated Chekhov comedy laced with horror' * Jackie Wullschlager, Financial Times *
'Sullivan brilliantly interweaves personal histories with terrifying tales about flight over mountains to Spain or Switzerland and by sea to Casablanca and Martinique, and with stories of forging papers, bribery, love and betrayal' * Sarah Curtis, The Sunday Times *
'Part history, part adventure story... the product of much devoted research and wide reading. Interesting, important, and her telling... gripping. Sullivan's book is full of interest, of good stories, of nice character sketches. She handles the huge cast she has assembled deftly, and her enthusiasm is obvious' * Allan Massie, Literary Review *
'This is a magnificent, complex narrative of courage, folly and complacency.' -- Jane Stevenson, Daily Telegraph, who, as the subtitle read, was 'captivated by the story of a Harvard classical scholar who rescued Europe's intellectuals from the Nazis' * Jane Stevenson, Daily Telegraph *
'With tremendous suspense and emotional pull, Sullivan recounts the little-known story of Varian Fry' * Vogue *
'[A] fascinating history' * Publishing News *
'Beautifully written in a style that is novelistic, Villa Air-Bel brings to life the story of this rescue through experiences of a community of artists who spent time in the Villa Air-Bel chateau ...The book is interesting and evocative and provides nuances and texture to one of the untold stories of rescue during the Holocaust' * Jewish Book World *
'A complex tale showing how hope and courage flourish, even in the toxic soil of totalitarianism' * Kirkus *
'...a true tale full of intrigue, danger, crazed love, death and survival ...The debt of modern culture to the motley crowd at the Villa Air-Bel is truly incalculable' * Bookpage *

Rosemary Sullivan was born in Montreal and has studied in Canada, the US and England. She currently teaches at the University of Toronto and is the author of ten books, comprising poetry, biography, literary criticism and literary journalism.