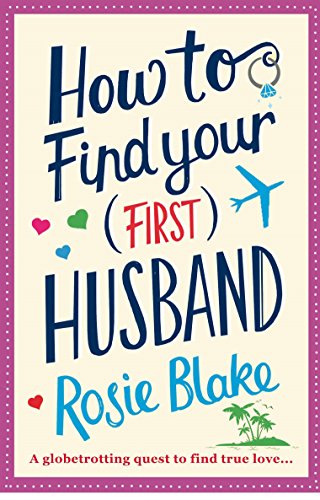 A hilarious and irresistible romantic comedy about a woman on a globetrotting quest to find her first love. Perfect for fans of Lindsay Kelk and Mhairi McFarlane.

Isobel quits her dead-end job and travels the world seeking the man she believes she is meant to be with. A hilarious and irresistible romantic comedy about a globetrotting quest to find love.

Isobel Graves moved to LA determined to be the Next Big Thing. Instead, she is dressed as a giant prawn handing out fliers promoting a fish market. Rather than attending glamorous parties and dating exciting men, her evenings consist of watching box sets with her sort-of boyfriend, whose idea of romance is a late-night drunken text.

Where did it all go wrong?

When Isobel catches sight of Andrew Parker, her childhood sweetheart, in the background of a TV news story she feels it's a sign. If she'd stuck with Andrew everything would have turned out better. Now she just needs to find him...

Join Isobel as she travels from LA to Devon and to a remote Malaysian island in search of true love.

Rosie is an author of comic commercial fiction. She spent her university years writing pantomimes based on old classics (highlight: 'Harry Potter: The Musical') and went on to write short stories and features for a range of publications including Cosmopolitan, The Lady, Sunday People, Best and Reveal magazines. She worked in television as a presenter on both live and pre-recorded shows in Bristol and London. She has written three novels and plans to write many more.

Rosie likes baked items, taking long walks by the river and speaking about herself in the third person. Her greatest ambition in life is to become Julia Roberts's best friend. She can be found at www.rosieblake.co.uk and @RosieBBooks

GOR010516648
How to Find Your (First) Husband by Rosie Blake
Rosie Blake
Used - Like New
Paperback
Atlantic Books
2016-06-02
400
1782398627
9781782398622
N/A
Book picture is for illustrative purposes only, actual binding, cover or edition may vary.
The book has been read, but looks new. The book cover has no visible wear, and the dust jacket is included if applicable. No missing or damaged pages, no tears, possible very minimal creasing, no underlining or highlighting of text, and no writing in the margins
Trustpilot