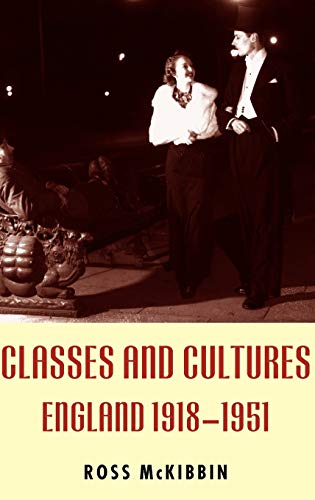 Out of Stock
$54.99
inc. GST
Taking the period from the end of World War I until the mid-1950s, Ross McKibbin investigates the ways in which "class culture" characterized English society, and intruded into every aspect of life. The study also explores the social and ideological foundations of English politics.
Very Good
Only 0 left

Ross McKibbin investigates the ways in which `class culture' characterized English society, and intruded into every aspect of life, during the period from 1918 to the mid-1950s. He demonstrates the influence of social class within the mini 'cultures' which together constitute society: families and family life, friends and neighbours, the workplace, schools and colleges, religion, sexuality, sport, music, film, and radio. Dr McKibbin considers the ways in which language was used (both spoken and written) to define one's social grouping, and how far changes occurred to language and culture more generally as a result of increasing American influence. He assesses the role of status and authority in English society, the social significance of the monarchy and the upper classes, the opportunities for social mobility, and the social and ideological foundations of English politics. In this fascinating study, Ross McKibbin exposes the fundamental structures and belief systems which underpinned English society in the first half of the twentieth century.

the implications of class culture for the period have never been spelled out so throroughly. The strength of this book lies in its detailed description of how class and culture interacted. * Harold L.Smith, American Historical Rev., Apr. 2000. *
a work of major importance that will have to be taken seriously by anyone concerned with the role of class in twentieth-century England. * Harold L.Smith, American Historical Rev., Apr 2000. *
Ross McKibbin is one of the leading historians of twentieth century Britain. His work is an important reference point for those who wish to fully understand British politics and society in the first five decades or so of this century ... McKibbin presents his material well. * Contemporary British History, Vol.13, No.3, 1999. *
McKibbin is excellent on matters as diverse as "ribbon development" in interwar housing, the different forms of male and female sociability in the working class, the impact of Hollywood films, the nature and appeal of betting, and much else besides. * Stefan Collini, TLS website *
mordantly witty Classes and Cultures: England 1918-1951 (OUP GBP25) side-steps high politics in order to unpick the threads of the British class system, richly mixing statistics and evidence drawn from mass literature. Ben Pilmot/Ind. on Sunday/29/11/98 Culture (Page 2)
Ross McKibbin's compassionate and detailed addition to the social history of Britain, C and C gave us humane scholarship at its very best./Lucasta Miller/ Ind. on Sunday/29/1//98 Culture (Page 2)
I am looking forward to reading Classes and Cultures: England 1918-1951 by Ross McKibbin (OUP, GBP25). * Richard Eyre, Financial Times weekend ed *
There is much that is interesting in McKibbin's book; he has thought deeply about his subject and knows it intimately; his references are drawn from an impressively wide and rich cultural field. * Philip Ziegler, Daily Telegraph *
fascinating new work ... It is a vividly detailed, highly readable account of the actual cultures of the classes ... McKibbin is fascinating and informative on home ownership. * Bernard Crick, Independent Saturday Magazine *
important study ... Every page of this book scintillates, combining high scholarship, understated argument and droll humour. * Ben Pimlott, New Statesman & Society *
...a detailed, thorough, well written and full account, which treats its subject fairly, and is well worth reading for anyone interested in the recent history of British culture and society. * Dave Renton. Socialist Review. October 1998. *
absorbing book ... McKibbin's is a compelling and stimulating analysis, full of fascinating detail shaped by the continuing relevance of the main themes, and impressive in the imagination and perception brought to the period. The style is characterstically trenchant and relentlessly analytical. The judgements on particular points of culture and social life are authoritative rather than derivative. It is written with humour, wit and sympathy; like some of the fiction he describes, the book is hard to put down. It is a splendid achievement. * R. C. Whiting, University of Leeds, EHR Sept 99 *
McKibbin's understanding of class is more sophisticated than the fairly traditional divisions of his book might superficially suggest. McKibbin pays careful attention to the gendered nature of class belonging and is particularly illuminating in his exploration of the experience and consequences of role segregation in working-class communities. The strengths of Classes and Cultures are legion. McKibbin's insights into the subtle workings of English society are displayed at every turn... his observations about the influence of the United States on social life in Britain, scattered throughout the book, are more insightful than those of most other historians... his analysis of the Americanization of the spoken language in England, along with the ways in which this was experienced by men and women from different classes, is particularly illuminating. * Chris Waters, Twentieth Century British History, Vol.11 No.1 *